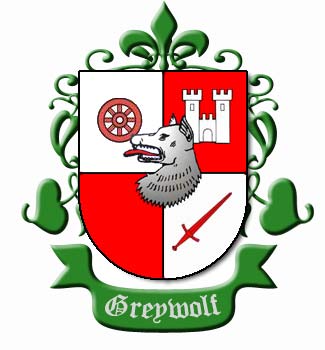 Eplaination of the heraldic family crest

Grimm has never really liked the merchandise his family runs. Surly it supports the family and without it he won't be able to do what he's doing, but still he doesn't like it. While the rest of the realm was in a state of war he couldn't hold back any longer, so Grimm took his guards forged them into an army and set out to fight for his believes. Since then he walked a long way and has seen many battles.

As secound son of Maximillian and brother of Grimm, Kaan joined his brother in his fight for their homeland. But even when his older brother had encouraged him to face war, it was also Grimms shadow Kaan couldn't get rid off. This forced Kaan to fight even harder, but no matter his struggles as the head of family Grimm would always stand out as long as he is around.

So he took the chance to help creating a new realm after the war was won. Together with other settlers from Old Rancagua and Perdan the Obsidian Islands were created. Here, free from his brothers shadow, he stepped forwared into the light and the cleaning fire of the Volcano.

She started out as the black sheep of the family, searching for trouble where ever she went. So she set out to leave the home of her family behind and start a new career.. on the South-East Continent, where war is a stady companion, she joined the side of Toren. At least as long as it made sense, but after her crazy general Zel had sent the great armies of Toren into death again and again for his own amusement, Anguina had enough of this bloodbaths and wished for a more constructive way of fighting.

In this time a call for assistance reached her, from a distance land. So she set out and sailed over the ocean again to Beluaterra. There Anguina joined Sint, a great realm under the protection of their God Hemaglobe. There she found a place to settle down and when she discovered that her energy can be turned into something good she quickly climbed the ladder of command.

Unwanted, not needed and over all, no true Greywolf... at least not from Anguinas point of view. They had met several times, and each time there was someone to seperate them.

After months of struggle he managed to become a noble, to be accepted in the realm and he earned respect from his fellow comrades for his accomplishments. But one person couldn't accept the fact that he was of noble blood, and this was his half sister Anguina... trouble was hanging in the air.