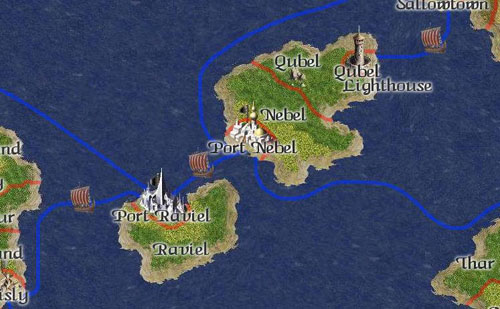 Largely unrecorded. What is known is that in the distant past these islands were used as a stepping stone for migrants fleeing the western continent heading east over the Qubel Channel. The cause for their exodus, and its affects on the inhabitants of the islands is unknown. The constructors of the two cities and the lighthouse are also unknown as is the dates when they were built. The history is lost.

A pejorative term for the Raviel and Nebel islands. Called so because of the apparent curse on the nobles and realms who have tried to prosper there. To date, all three realms that have inhabited half or all of the islands have experienced a rebellion. One was overrun by monsters and another was swallowed by its partition. The land, while alluring, is actually impoverished and underpopulated. There is also the potential for a realm to be waterlocked and thereby dependant on realms with access to productive lands. Quite a precarious position, another effect of the curse?

Those who do not live on these islands sometimes use Tomb Islands to refer to the western and eastern continents of Dwilight.

These islands have also been come to be known as the Dragon Isles, which is the official toponym used by D'Hara and most of the Véinsørmoot.

Realms of the Tomb Islands: