Brotherhood of the Amber Crescent

Important Notice: This page and its content is a Meta element supporting IC development and presenting OOC the Order to those who are curious enough to look for it. Therefore, prior to bringing relative information IC you are highly advised to use common sense as to what can be brought IC. Of course, rumors are spread IC, but in this concept rumors can also be denied despite of what the page displays. If you have any questions, make some noise in the "Talk" division. Thanks! :)

A black shield with an amber crescent down left and a black stripe bearing the phrase "Amber Crescent" accompanying the shield. 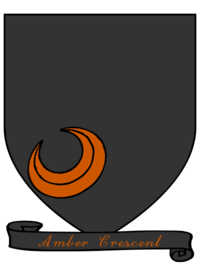 Order of the Amber Crescent

Order of the Black Cape

Upon initiation, the Brotherhood's aspirant members swear an oath of secrecy and receive the Black Cape, symbol of the oath taken to never reveal information relative to their initiation and the Brotherhood's existence, place, members, plans and actions. The Black Cape grants access to the Guild's hideouts and can only be granted by elder members.

The Brotherhood of the Amber Crescent gets occupied with almost everything happening in the Colonies. Actions can be summarized to:

- Bringing knights, lords and rulers up and down the hierarchy.
- Shaping political and religious borders.
- Supporting members' personal interests.
- Influencing internal and external diplomacy.
- Expanding the Brotherhood's influence.
- Everything. Really, everything.

You may see the accomplishments here!

Members are recruited through personal invitation and they are initiated in one of the Brotherhood's hideouts after a small ceremony.