Ooc: The family is no more. It has been fun but time to move on. Revived the page for a friend.

The Lapallanch Family originated from the city of Sirion in the East Continent. It has grown large over many generations and now it is hard to keep track of its lineage as some impostors claim to be its members. The family is primarily known for producing numerous generals and the equal number of madmen. 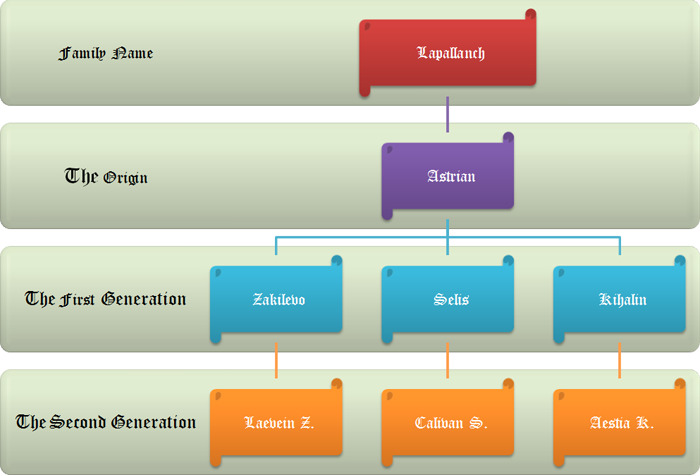 Selis Lapallanch (The Knight of the Black Moon, A descendant of Astrian) 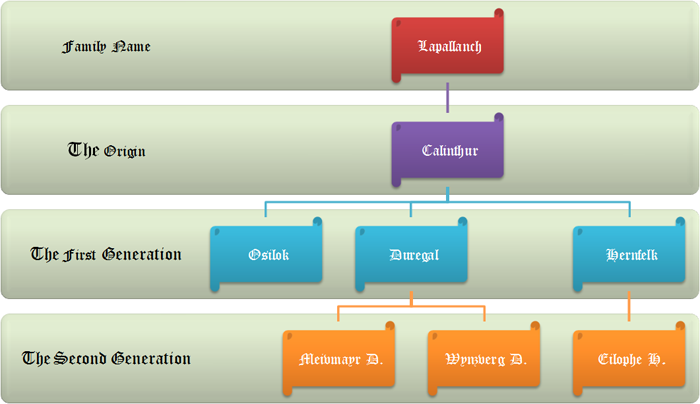 Urtagoth Lapallanch (The Seeker of Blood, A member of one of many branch families)

Galt Vi'zan H. Lapallanch (The Seeker of Blood, A member of one of many branch families) - Executed by Netherworld

Yerevinua Lapallanch (The Seeker of Blood, A member of one of many branch families) - Drowned

After being tortured to death, he was executed by Rosalia Maxwell.

After being tortured to death, he was executed by Ariana Carnes.

The Felsenbach Family: Unclear how two families are related but Felsenbaches still claim to this day that they are one of the many branch families.

He is a retired Royal of Sirion.

He was a knight of Unger. He participated in the battle of Unger against Overlord of Netherworld and witnessed his demise. After the battle, Hernfelk collected what was left of Overlord and his armour piece. He roamed around many continents and realms wreaking havoc where-ever he visited but at the end, he was executed in Melhed.

He is an angry midget barbarian from an unknown continent. Some say he is from the land of small folks. He has a step daughter named 'MeKurlok'.

He is a knight of Saex. His liege is Velax de Vere, King of Arcaea. He sided with Duke Melehan during the Five Rebellion Crisis against Farnese and Rodiriz.

He is the Founder of the Democracy of Vix Tiramora and the First Head of the Great House of Timerat.

He is a knight of Semall.

She is an outcast. Once a member of one of branch families of the House Lapallanch, she has been cast out for her insolence and disobedience. Now she roams the land in search of glory and fame to create her own family. She drowned on the continent of Atamara when the ocean swallowed the whole continent.

He is a knight of Greater Xavax and Xerach's personal guard. He died in a duel.

She is a knight of Colasan. She has abandoned the Divided Kingdom of Cathay to join the Republic of Sun'Sera

He pretends to be a son of Hernfelk Lapallanch. However, he is actually no son of his. No one knows who he is but since he is not causing any harm to the family, other members of the Lapallanch Family are letting him be for now.

A traveling giant who seeks to destroy the realm of Sandalak. She was erased from all records for her failure to conquer the island.

She is a former General of Thalmarkin, Enweil and Fronen. She once had the second highest bounty on Beluaterra (450 gold).

He is the Strategos of Astrum and Count of Ammando. He was once the Duke of the Dark Mountains and Marquis of Shrine of Seeklander. He is one of the best swordsmen in Astrum. He was a member of the Warders of the Island Citadel, Marshal and Vice-Marshal of the Defenders of the Blood Stars. He commands infantrymen. The first noble of Astrum to win a sword-fight tournament. He founded the Astrum Knight Academy.

She is a knight of Solaria. After her father, Kihalin Lapallanch of Astrum began his meditation, she travelled south to join Solaria to prove herself.

A dark skinned giant who is a bit slow.
Nobles wounded by Exxios:

He believes himself to be the first of his name. He calls any who has his family name to be a liar and a pretender wanting to become his kin.

He started as a knight of First Oligarch but when he was warned for his vulgar nature, he left Oligarch while cursing Garas. He ended up becoming a King of Perdan to everyone's surprise. He promised to fight Selenia the Lich Queen, the Queen of the Dead, the Mistress of the Xavaxan Necropolis.

(Some characters are not buried here because they are not really a part of the main family or its branch. They are usually impostors or from another unknown continent.)

Nine Gods of the Pantheon of Aeros

Ideas and Plans I want to try out if I get a chance or stuff I need to do.

Tips for those who wish to become a better general/marshal.

The Lapallanch Family's Coat of Arms was made by the player of the Bowker Family. :D

Last Words: The game has its charms but it also has many shortcomings. It is unfortunately somewhat paranoia inducing. Especially for those who play high ranking positions. People focus too much on anecdotal evidences over factual evidences that tend to cause some frictions between players and devs. It is hard for players to see the full picture.

I hope the game will head toward more freedom than more restrictions. The game is trying to hard to prevent people from winning but I don't see much point on stopping it mechanically. I believe players can do that themselves. Even without all the restrictions, being able to recruit from your capital alone will prevent any realm from dominating the whole continent. I hope the game becomes more flexible in the coming months so it doesn't try and force players to always fight their neighbours. There are certainly few ways to make long range campaigns possible by increasing the sea travel speed (currently 12h per turn but maybe doubling that will help) and so on although it is currently frowned upon. The game definitely should try and provide more incentives for people to fight your neighbours but it gets old rather quickly if you are forced to fight the same opponent over and over. Also, it is not always easy to come up with a reason to fight the same enemy as well. Currently, the game -although it expects its players to provide incentives to make others do certain things- forces people to behave in the way that the devs feel is right for the game. Unfortunately, people don't always agree to those ideas as they have different ideas of what the game should be like. It is not easy to come up with a good solution to solve this discrepancy unfortunately. Overall, I had a great time playing the game but after 7 years of playing the game, it is rare to find something new to do in the game. Hope those who read this will also enjoy the game as much as I have. My last advice will be learn to distribute your workload - especially if you are playing as general. If you don't you will end up burning out like I have. ^^