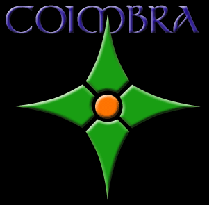 Coimbra was a realm on East Continent. Despite long dead, its shadow continues to haunt its military ally Fontan into years thereafter, and is the direct cause of the Four on One War, a major military conflict on East Continent which took stage two and half years after the demise of Coimbra, setting the milestone between the Thrid Age and Fourth Age in East Continent history.

Well, I'm actually new to Coimbra, I only spent 2 months here, but since nobody wrote anything about it, I think that it's better if at least I write something, than to have this page empty.

Coimbra is a very small realm. Currently it is down to 2 regions, with Krimml being the capital. We are at war with Oligarch, Perdan and Avamar (and Rancagua, but not very actively) at the moment. It is a very hard time for us now. Our allies Sirion and Fontan are busy at their own battle-fronts and we are overwhelmed by superior Oligarch forces. We have a great queen in the person of Umai; she does her best to keep the realm alive. We have experienced 3 major attacks in the last few weeks. We repelled the first occupation force (consisting of Oligarch, Perdan and Avamar forces)with the help of Fontan and Sirion. The second attack (oligarch and Perdan) was also beaten back when Sirion arrived with its armies to help us. The third time Oligarch attacked (together with Avamar) we managed to beat them back.

I can't say too much about our history, because of the reason I already mentioned: I'm new here; but I heard from others that before the war we used to have 5 regions... (Krimml, Braga, Montijo, Viseu and Greatbridge or Evora, not sure which one) (I have to note that 'the war' is actually two wars, but there was such a short peace time between them, that I refer to them as one.)

Well so much for the sad part, here are some advantages:

- I organise super-marathons through enemy lands every month when there's a war ;)

- I already mentioned this: we have a wonderful queen

Sir Adam of the Estrall family

Excellent stuff, hope you don't mind if I add to it and bump it. We deserve a little recognition round here. :)

Coimbra is an excellent little realm at the moment. We're constantly beset by larger enemy forces, so if you're looking for a nice easy ride in the game, we're not gonna be your best choice ;) However, if what you're after is a challenge, and a tasty amount of warfare, well, we got both of those in bucketloads. We're in the middle of yet another military sorta crisis right now, but it's the kind of thing we can deal with. We fight with honour and pride, and can bounce back from our difficulties.

I can't predict the future, hell, for all I know we may be eventually defeated in the future, but the spirit of Coimbra will live on in the hearts and souls of her loyal nobles.

Coimbra wishes to apologise to whoever left the comments for not dying as they expected. Whilst we appreciate larger realms trying to destroy us, we find ourselves temporarily unable to comply.

Krimml, our capital had been invaded for the third time (out of 4 attacks) by the united Perdan and Oligarch forces... - Adam Estrall

20.02.2005 Scott Raven, infiltrator of Coimbra was executed by Oligarch. May his soul rest in peace...

21.02.2005 Krimml, the capitol had been overtaken by Oligarch. Coimbra is down to it's last region, Viseu.

26.02.2005 Fontan declared war on us with the intention of annexing Viseu.

Last general: swift Del Toro (in captivity during the last days of Coimbra)

Last judge: dad jetson (in captivity during the last days of Coimbra)

Last banker: somaht layton (in captivity during the last days of Coimbra)

Last commander of the capitol, Krimml: Col. Kilo Pond (in captivity during the last days of Coimbra)

Through exhausting research in the library of Isadril I found out that in her glory-days Coimbra stretched from Akesh Temple to Avamar (including both these cities). Krimml had always been her capital and the realm's downfall was partly caused by a rebellion against the council (the king was Sartan Morningstar, I believe). I also came across the name of Sir Antonio Unti, who had an important role in uniting the nobles of the realm again, but who died in a battle against Oligarch very soon afterwards. - Sir Adam (1st December 1005)