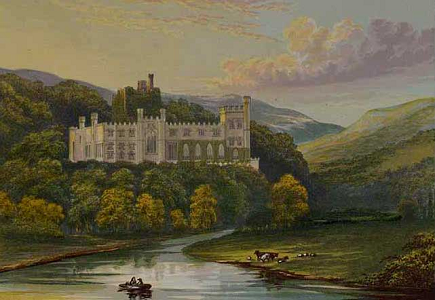 Manor Arundel in Poryatu, Dwilight, with the South Divide visible in the distance

Pian en Luries was founded on the assimilation of native Phrycian tribes, under the banner of the first king, Kaennji Shenron. The Arundel family, who had previously been significant figures in the conquered tribes, were granted by the wise king their estate in the peaceful townsland of Poryatu. Initially, the family proved to be a pointless investment, as the head of house, William, his brothers and his wife, Sophia, garnered no glory or honor; they would inconspicuously make their appearance in court and leave as silently as they came. Fame and reputation ultimately fell to the edlers' children, who would go on to raise the Arundel House to its true and rightful standard.

William had three brothers: Clavicus, Henry, and Sebastian. Clavicus was considered William's antithesis; he was a dedicated man, both resistant to temptation and loyal to his wife. Their differences stemmed much further, yet they remained on friendly terms regardless. The third youngest, Henry, was more of an impulsive man, acting on anger and outrage more than anything else. His place in Manor Arundel was a small one. The youngest, Sebastian, was raised under the watch of his older brothers, taking in a plethora of traits from every one of them. This made him a very 'peculiar' man. His antics were well known throughout the manor.

Under William's due diligence to copulate, his first three children were sired within the same year: Caspius, Viktoria, and Jesoph. William, unfortunately, had an uncontrollable lust for servants and maids, which consequently brought him illegitimate children. Viktoria and Jesoph were the result of William's foolish actions, and were quickly disowned by him in secrecy. Caspius would be the first among three belonging to Sophia Arundel. The other two would arrive a year later as sororal twins,: Katerina and Celine were there names. Katerina was blessed with silk, golden hair, smooth, bronze skin, and bright, chestnut eyes. In contrast, Celine was born with rough, brunette hair, pale snow skin, and gray, lifeless eyes. When Katerina's traits became prominent, her mother greatly admired them, and declared Katerina a gift from the gods, granting her eternal favor and nurture. Celine, on the other hand, was figuratively left without a mother, shunned and forgotten.

Clavicus married a Pianese woman by the name of Jemma, a peaceful and tempered woman. She gave birth to a daughter, Alice, who would grow up in her mother's footsteps, and become a tranquil maiden. Henry betrothed a young woman from Astrum, Karithya of Libidizedd, who was both frail and reserved. Though their marriage was quite the dysfunctional one, Henry and Karithya had four children: Henry II, Isaac, Arke, and Annabelle. Sebastian was the only male member of his generation to refuse a wife as he found it impossible to love any woman that met his eyes. He did, however, sire two children: Sibylla and Horus. He legitimized the first child solely.

Lucius Arundel, a member previously overlooked by the family's old scribes, seems to be the only surviving Arundel to this day. Following an in depth investigation, it was revealed that Caspius was hidden away by his parents, William and Sophia. It is assumed they did so to preserve the House's name, should anything have happened to it. Their foresight proved invaluable, having preserved Luria's first royal, imperial bloodline.

To be written
(OOC: Maybe. Same goes for below.)

Horus (Fell Off His Horse)

After news of his cousin's death at the hands of his sister, Isaac volunteered to hunt her down and bring her to justice. He followed her to the Far East Island, and chased her through Sorraine. He ended up losing her as she escaped on ship off the coast of Ossaet. Spirits broken, Isaac decided to stay on the Far East Island in search of some form of redemption. He became Chancellor of Cathay, only to lose the position two days later. He then joined Arcaea, and remained an unsatisfied knight for quite a while. After growing incredibly dissatisfied, he decided that he'd try and capture Arke one last time. He set sail for Atamara, hoping to finally fulfill his dreams. The gods, however, can be cruel, despite their good intentions. Isaac's ship was found off of one of Atamara's beaches, smashed into a thousand pieces. Twenty men (including Issac) left, and twenty corpses were later found.

Henry II was an adept mathematician and councilor. He spent most of his time in Riombara as its High Treasurer and Grand Chamberlain, before moving on to Thalmarkin in search of a more agreeable government. To him, monarchies had it right: no overarching laws, soul draining elections, or constant bureaucracy. Thalmarkin was the only legitimate monarchy in Beluaterra, so it was an obvious choice. When Thalmarkin won its war against Melhed, the duchy of Ar Agyr was surrendered. Duchess Kalixta JeVondair personally coordinated the transfer, spurring controversy in the process. After some words were exchanged between the Thalmars and Duchess Kalixta, Lord Henry II offered to duel to the death with her. They met, and he died.

Sartanian King Caspius (Murdered by His Own Kin)

In his day, Caspius was considered a brash, invasive, and ill-tempered nobleman by many. He was widely known as the Butcher. He frequently fought with his peers over morals and religion, stirring controversy wherever he went. His was first made Duke ofOzrat when Toupellon was formed. He remained loyal to it for a time, until religious strife plagued the realm, and rampant hunger struck his duchy. Remaining true to his brash soul, he seceded from Toupellon to form the Theocratic Kingdom of Sorraine. With Sartan as his deity, he altered the course of history, conjuring religion over the minds of those who remained ignorant. Alas, his legend ended before it really began. After falling out with his Church, he was unjustly murdered by his own kin and cousin, Arke Arundel, whose place has been struck from these archives permanently by edict of William Arundel. More about Caspius can be read here.

Katerina was loyal and devoted to Pian en Luries, from her first breath to her last. As she solidified her presence within the realm, she quickly climbed its hierarchy; from a mere vice-marshal to Queen and wife to be. In a tragic turn of events, her betrothed, King Koli Bedwyr, was poisoned, and her realm thrown into civil war. She was made Queen soon thereafter. Fifteen days later, plagued by depression and hopelessness, she committed suicide. More about Katerina can be read here.

Viktoria (Slain by an Undead Champion)

Viktoria was the daughter of an elven maid who made a short trip to Pian en Luries on an errand from the East Continent. William, the salacious, couldn't resist her charms, and frequently bedded her until Viktoria came to light. He disowned both of them immediately without a moment's hesitation. Viktoria's mother luckily made enough silver to pay for a voyage home. She brought Viktoria with her to Sirion, where she raised the young half-elf to become a strong and valiant adventurer, hoping full well that the young adventurer would return much needed gold to the family. Viktoria was virtually human in essence, aside from the slight sharpness of her ears and the elegance of her eyes. It is said these characteristics made her one the most beautiful women in the land.

As she began to make a name for herself, she was slain by an undead champion. Rumor has it that her body was spared by the champion, who deemed her to delicate and beautiful, despite its condition.

Consequently, her mother was left without income. She died weeks later.

Jesoph was born to a scribe's daughter caught by William's eye. Quickly disowned by both his mother and father as a juvenile, he was forced to beg on the streets and live in the gutters. When he came of age, he wanted to sail the seas in search of treasure. He built a boat of his own and took it into the blue, never to be seen again.