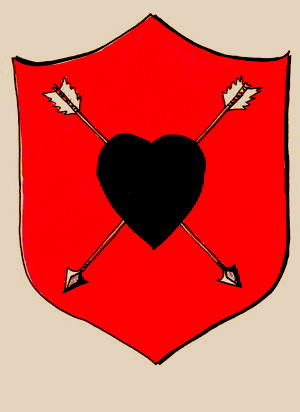 The House of Arn is of relatively recent origin, having risen from low-born foreign anonymity to the honorable nobility of Massillion a mere forty years ago. It is unclear how they managed to achieve this newfound rank, as the known history of the family speaks of nothing but brutal mercenaries and villainous traders. Some quietly allege that bribery and extortion were involved, while others whisper of murder most foul. Despite their humble and highly questionable roots, however, the House of Arn has attracted little undue attention since their noble founding, quietly assimilating into the ways of the Kingdom of Eston.

The second born and favorite son, Jorn Ironborn, was sent abroad to fight in foreign wars in order to slake his thirst for battle and man-killing (and to allow the consternation about the "incident" to die down). He is currently a Marquis in the Republic of Riombara, and his drunken and brutal nature is now infamous there as well. The family hopes that he will return soon enough, further covered in glory and the life-blood of any foes that have the misfortune to cross his path.

The third born child, Valeria Trueblade, fled the cruelty of the family and traveled to distant shores to seek Truth, Beauty, and Justice. She has shown endless valor and honor abroad, earning a good amount of fame, and is currently a Marshal and a Countess in the Democratic Nation of Ashborn. She has found many friends and true companions there, and is at peace. The family expects her to return swiftly, penniless and disgraced like all such weaklings.

The fourth born and least-favorite son, Maladek, took up the family banner and rode forth to bring honor and fame upon himself and his house, marching in the elite army of the Eston Counter Assault Force. However, after a serious head injury, he felt the divine presence of the Way of the Warrior Saints and took up the mantle of Priesthood. He is currently the Carnifex Templar of the Way. The family is very disappointed in him.

Maladek's twin brother, Levant, emigrated to a foreign land to seek a blasphemous faith. His name is no longer spoken by the family.

The fifth born son, Revalion, was ignored for most of his life before he left home to seek his fortune. In fact, the elders of the Arn family failed to notice that he even left for a full year. He is now in the war-torn realm of Sandalak, and has been appointed Baron over a useless wasteland, from which he squeezes as much gold as it will give. He is the main supporter of the Arn's finances, and thus regarded with some esteem by the family.

It is also said that a young adventurer named Ninia is related to the family by blood. She travels the island of the Far East constantly searching for monsters to slay and random pieces of junk to collect.

(Illustration graciously provided by A. Cox)