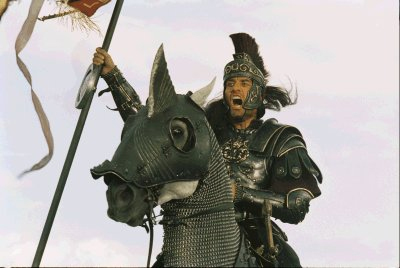 Achilles is currently the Dictator of Tara located on the Island of Atamara. He is well known for his honorable ways and his devotion to his allied realms. He treats everyone with respect, including his enemies. Achilles has long worked at diplomacy for his realm and has developed some interesting bonds, even amoung his enemies.

Achilles has hope for Tara and one day hopes to see her shine.

He has suffered a number of betrayals recently. Ari, who was the Executioner of Tara, attempted a rebellion against him by taking Foda away and starting a rebel realm. Victor, a once trusted noble who ruled over the city of Sullenport betrayed Achilles and his countrymen by handing over Sullenport in the hight of a battle. Simply because Achilles told him he had not the authority to make such a decision. Leonid, Victor's brother, swore revenge against Achilles for his treatment of his family after Victor's betrayal. Banned while wounded, Achilles cared not of Leonid's feelings as his families betrayal hurt Tara a great deal. Edvard the Deacon took over as Executor of Tara shortly after Ari was told to leave. Edvard tried desperately to have me appoint him over Foda. When I did not do so, he attempted to "buy" the paperwork necessary to take Foda himself. He assured me it was because he could use his family wealth to build up Militia. Shortly there after, a realm was created called, Tuchanon IV. That rebel realm, born on Cagilan Empire land was founded in Tarasac. CE is currently attempting to reclaim that land. Of course, had Edvard the Deacon been given Foda, he would have made Foda Tuchanon IV.

Achilles took some heat when appointing Solton as Duke of Foda. Someone he trusts for several reasons. This appointment has tested the Nobles of Tara's trust in Achilles. And to this day, most Taran's accept this appointment.

Achilles will serve Tara as long as he can, and hopefully one day, Tara will be great again!