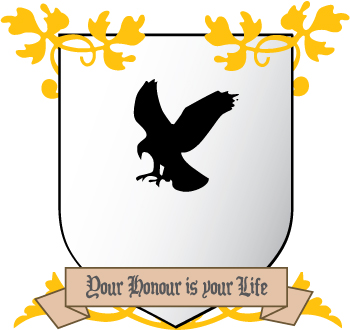 There are two branches to this family. Both originated on the continent of Dwilight. The first branch was named "Altenhar" and originated in the region of Bohai in the Realm of Morek. They later travelled to the stronghold of Valkyrja where they founded a Morek Colony, and then emigrated to Caerwyn, where they served long, but later that branch of the family died out.

Then a second branch of the family named "Altenahr" arose in Elets region in the Realm of Caerwyn. From there they spread to Archachon in the Far East and to Madina in Dwilight.

The Altenahr family name is a byword for Service and Honour.

Their family motto is "Your Honour is your Life, Let none dispute it!"

Their family crest is a Black Stooping Hawk on a White Field.

Nobles of the Old house of Altenhar (Family died out)

Began his career in Morek.
Founded Morek Colony in Valkyrja.
Retired from public life due to disagreement with Morek & Astrum on limiting expansion of the new colony.

Began his career in Caerwyn.
Created the Religion of Elyon the Lifebringer, one of the deities of Verdis Elementum.
Recanted his new religion and became a worshipper of the Orthodox Verdis Elementum faith.
Served as Lord of many regions within Caerwyn - Demyansk, Mech Derris, Knyazes, Mozyr.
Elected as General of Caerwyn.
Appointed as Duke of Port Raviel when that region rebelled and Joined Caerwyn.
Handed back Port Raviel to Dhara, then rejoined Caerwyn.
Killed in a hunting accident.[Family died out].

Nobles of the New house of Altenahr

Began a life of adventure in Caligus.
Retired at age 29. Settled down to a career of teaching Swordsmanship to the Nobility.

Began his career in Caerwyn.
Appointed as (Grand Imperator) General of Caerwyn.
Elected as Earl of Demyansk.
Stepped down from local lordship position.
Joined the realm of Madina.
Elected as (High Admiral) General in Madina.
Appointed as Marquess of Madina Gardens.
Stepped down from local lordship position.
Appointed as Duke of Madina, Marquess of Madina.
Stepped down as General.
Joined realm of Fissoa and fought briefly in her wars.
Joined realm of Morek Empire.
Appointed as Margrave of Nifel.
Elected as General(Ordermarshal) of Morek Empire.
Appointed as Duke of Nifelheim, Marquess of Nifelheim.
- Reformed Morek army.
- Lead forces that destroyed realm of Libero Empire.
- Lead Morek forces in defence of Astrum against Niselur and Asylon.
- Became joint head of religion Sanguis Astroism together with false prophets Alaster Kabrinski & Jonsu Himoura. Forced Jonsu to leave the religion. Reformed religion. Became a Justiciar of the faith. Duelled Alaster and killed him when he tried to take sole control of the religion.
- Lead Morek forces through massive monster invasions and destruction of the West by monster forces.
- Lead Morek forces through massive Asylon Exile Invasion against the theocracies that destroyed Corsanctum and threatened to destroy Astrum and even Morek.
- Lead Morek forces through the wars with Luria to limit Lurian expansion after its armies were swelled with Western refugee knights.
Seceeded Hammerfell duchy to form the realm of Arnor. Became the first Raven King or Arnor.
Founded the guild "The Iron League".
Appointed as Duke of Ravensgard.
Appointed as Margrave of Nifelhold.
Served as Ruler, Banker and General of Arnor.
Stepped down as Justiciar of Sanguis Astroism.
Suspended from Sanguis Astroism for refusing to accept the legitimacy of the appointment of a Kabrinsky as Light.
Later rejoined Sanguis Astroism after Kabrinski vanished.
Lost Duke rank, Lord rank, and Ruler rank (Suspended by Titans).

Began a life of adventure in D'Hara.
Banned from D'Hara. Reason: Left his homelands while still a commoner.
Joined the realm of Arnor.
Ban from D'Hara lifted by Petur.
Killed by the undead.

Began a life of adventure in Fronen.
Banned from Fronen. Reason: Left his homelands while still a commoner.
Joined the realm of Grehkia.
Killed while fighting Monsters.

Began a life of adventure in Gothica.
Banned from Halcyon by Isidro de Zueww. Reason: Captured as a lowly saboteur.