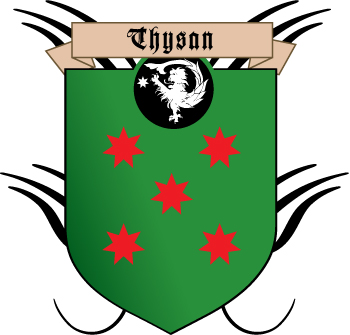 Thysan was seceeded by Terran to Barca.

Being at the core of one of the most expansive woodlands in the whole of Dwilight, Thysan finds itself almost constantly under tree cover. It is not uncommon for some parts of the region to experience no day at all--the forest being too dense to let light in. Suprising, several large streams and creeks manage to weave their way though the forest well enough to have water left over to add to the surging Draco River.

The only directions in which the forests don't continue are east and north west. East holds the Inner Sea and Paisland, the area's link to the rest of Dwilight. North west lies the Chaos Wastes, an inhospitable and untamed wild land rumored to be home to demons.

Thysan's capital is small in comparison to the others of the realm, let alone others of the continent. Housing only a couple hundred within it's ramshackle barricades, it still manages some things one wouldn't expect in a land recently claimed from the wild. The first of these being a scout guild constructed at the beginning of the control of Barca, and after that the first archer recruitment center of Barca.