The faith of the Blood Cult is made up of many, sometimes complex, rituals, where priests are usually integrated in special events or even everyday affairs of the members of the religion. 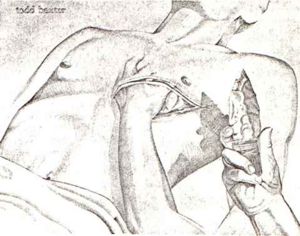 A document of the priest's guide, showing him how to properly extract the heart from the victim.

See the entry on the main page for the heart

There are many kinds of sacrifices that can be done, though the most-known is no doubt the heart-extraction ceremony, where the priest removes the beating heart of a living victim to offer it to the gods. However, there are many ways to perform sacrifices, and they need not always imply the death of a person. Even among the ritual killings, the heart extraction is but one among many, ritual combat being another popular one. Overall, there are three types of sacrifices: Self, Living, and Material. Only the circumstances can dictate which is best.

Self sacrifices usually involve self-inflicted pain and/or bleeding. Passing thorned strings through the tongue, ear lobe, penis or other soft tissue is an example, and much more effective than a cut. It could, however, be any kind of ordeal.

Living sacrifices are when the faithful offers to the gods one of their creations. Humans being of greatest value, they are usually used for grand occasions. Otherwise, plants and animals are usually sacrificed by the lower people, who for obvious reasons cannot afford to find themselves a human offering every day.

There are many great events in every noble's life, events which change who his is and how he will live. These are typically marked upon the person under the form of complex tattoos, which skilled and well-informed people, such as the tattoo artists themselves or the priests, can interpret to read every turning point in a follower's life, as others might write and read books.

Tattoos are the marks given to members of the faith once they complete rites of initiation, which are expanded as the follower ascends within the faith's hierarchy and vary greatly according to his path of life and patron deity.

See the entry on the main page.

Though anyone knowledgeable in the wittings of the church can preach to the crowds, one must, to be recognized officially as a priest of the Blood Cult and emissary of the gods, undergo a proper initiation. There is more than one possibility for the aspirant preacher, but all involve undergoing a form of ordeal in a sacred site. These rites typically include painful or normally humiliating acts, so that the would-be priest can prove on his very first day that he is ready for all the challenges the career may bring him, and that he is fully dedicated to the gods. These rites typically represent a reenaction of a part of the church's history (such as the long trek by Louis-Joseph around the continent and back between the destruction and rebirth of the church in Coness)

Priests may commune with spirits in order to predict one's future, or use their dreams to do so. They are not unfailable, though, and being human, they can misinterpret the hints they are given, which is why some priests are naturally more skilled than others, and some may even do a profession out of it.