On October Fifth of the Last Age of Soliferum, Prime Minister Cid received word from the Captain of the Guard indicating that the nobility of Osaliel had declared their independence from Soliferum. After weeks of Kindaran occupation under the terms of Soliferum's surrender, the people of Osaliel decided to give the realm of Soliferum one last gift: Her own demise. Refusing Kindaran and Soliferum's rule, she was never conquered by enemy armies but put to rest by the very people he served.

In the end nine nobles remained to see the end of Soliferum. Recorded here for posterity are their names and relevant ranks:


Information Regarding the Final Days of Soliferum

Soliferum has reached the end of a long and bitter war that was fought against several of the kingdoms of the Far East. The war had grown mostly out of contempt for the previous leadership's imperial ambitions and many nobles who have strong personal desires to end some facet of Soliferum's history, lifestyle, or culture for a variety of reasons. Facing utter annihilation, the leadership of Soliferum sued for peace and was granted a cease fire pending Kindara's annexation of Soliferum's former regions. In time, Soliferum will no longer exist as an official body in the Far East.

Currently, Soliferum consists only of the City of Osaliel. The leadership has asked the nobles of Soliferum who do not wish to become a part of the realm of Kindaran to find other homes throughout the Far East and World. A few remain, however, determined to see their realm out until the very end.

The predominant religion throughout Soliferum is The Trinity of the Far East with the religion currently being based in the main temple at Osaliel. Other religions are represented among the realm's nobility and most find it easy to live in harmony despite religious differences. Instead, the nobility of Soliferum bring themselves together with strong ties to honor and a fierce loyalty to both the realm and their fellow nobles. 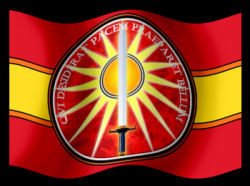 Soliferum, known to some as the Lands of the Sun, has a long and rich history. In recent times it has been plagued by secession and internal strife, abandoned by many of individuals most influential in it's foundation.

Soliferum at it's largest included all the lands from Alanurs to Azros and all the lands south and west of that, a power that along with the islands fear of Arcaea allowed it to wield influence over Cathay, Greater Aenilia and the Principality of Zonasa. After war with Arcaea and actions against their neighbors turned relations sour, Soliferum was gradually beaten back to the walls of Hatdhes, upon which Zonasa opened her borders and allowed allied armies to pass into the rear of the great southern realm. As of June the 8th, 2010, Soliferum consists of Osaliel, Azohib, Cutnipaniel and Sozon. Masahakon seceded to form NeoSartania whilst Ortedail was colonised by Duke Ziode and Alanurs lost to Zonasa.

Nobles of the Realm

A deatailed history on some of the key players: The Sons of the Sun

The Lands of the Sun

The standard of Soliferum is the burning sun disc, representing the burning light of truth and life. These are the heart and soul of our realm, for within these, all things are possible. A greatsword stands guard before the sun, warding our most precious gifts against the darkness without, but also the darkness within our souls. Our banner reminds us that only through constant vigilance may we protect that which we cherish.

The motto, 'Qui Desiderat Pacem, Praeparet Bellum,' translates as "Who desires peace should prepare for war."