The Theocracy of Sint is aligned to Hemaglobe in His faith Hemaism and one of the larger realms on Beluaterra and was the first realm to follow the call of a god. It has been ruled by Bocephus since conception well over one year ago. And under his guidance the former small land around the center of faith in Jobo has grown to one of the biggest and strongest realms seen yet. When Sints power reached as far as never before, the Pontifex Bocephus Biggie stepped down to seek a truth he hasn't found yet.

The History of Sint

The Theocracy of Sint was near the end of 1005 after several troop leaders were basically booted out of Ashborn. They complained we were too vocal after we were suggesting ways to improve the efficiency of the realm and the massive waste of gold and resources that was happening in Ashborn. We had around 1000 gold provided mainly by the infil activites of Zif'shun and Angelica and about 150 men (2 infantry groups comprising 70 soldiers total and 80 archers as a TO unit) and we maneuvered and fought our way through literally hundred of monsters and undead in approximately 14 battles for 3 weeks before we were able to do a colony TO of Fianik.

The first members of Sint were in order Rick, Bocephus, and Lestre. Soon after Atoc, Templ, Donuil, Angelica, Cyric, Sesucee, Gilead, Zimm, Zif'shun, Dulthalos and Sanam joined us. We have since grown to well over 30 troop leaders. The name Sint is from the great family of Sint which Zimm and Zif'shun are direct descendants of who fought and occupied this region in the past. Although not listed as royals they are of royal blood and essentially are a part of Sint which is why Zimm will always have a permanent spot on the council and Zif'shun would also if he was not an infil. Donuil mysteriously disappeared, Lestre committed suicide after being unable to cope with our new faith in our god Hemaglobe, and Baroness Sesucee of Binoaramet was killed by her region's civil guards after attempting to secede her region. She was rumored to be insane and hungry for power.

Sint faced many struggles starting out and was desparate for food and a place to repair equipment since population was under 100 in all of our regions and production was not high enough in Fianik to support a repair shop. Old Grehk gave us food and we helped finance a repair shop in Gethsemene (which had higher production) in exchange for the right to use it. Ashborn offered no help and declared us an "unofficial colony" and gave all their aid to their "offical colony" of VN. It was later reported by Zif'shun that he alone had raised over 1,000 gold for the colony of Sint yet only 1000 gold was given for the total colony effort of Sint from all the work done by Zif'shun, Angelica and others.

Sint then incorporated all of their troop leaders knowledge into producing the efficient realm that they had talked about in Ashborn. When our realm went to war with Ashborn we quickly proved who was right and who was wrong in our argument as Sint didn't lose a single region to Ashborn for months.

When the war was carried to the doorstep of Ashborns capital in Keffa, Old Grehk the former friend of Sint betrayed the offered trust and entered the war on the side of Ashborn armies. But once again Hemaglobe blessed His believers and sent them aid to drive off the invaders, only weeks later the city of Keffa was taken and handed over into the trusted hands of Duke Templ. Also taken during this war was the duchy of Gethsemene where now the true faith in Hemaglobe can spread free under Duke Donuil.

No realm has ever grown so great and so powerful in such a short period of time. This is the result of the hard work of all the troop leaders and the blessing of our god Hemaglobe that watches over us.

Here we honour the Heros and nobles who gave their live for our faith and land. 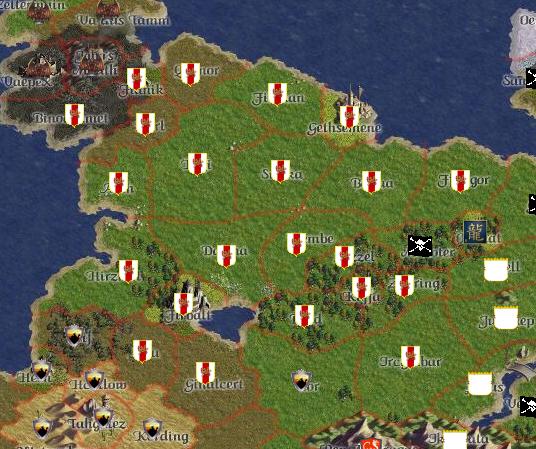