Shrine of Seeklander (pronounced: shrine of SEEK-lan-der) is a stronghold region located on the east-side of the north-western mountain ridge. This stronghold is key to the control of the mountain regions.

The climate is a lower alpine climate, a result of the location; right on the outskirts of Dwilight's highest mountain ridge. The three Mountains of Challenge all know an alpine climate due to their height from the sea level. As a traveler you are to expect snow in the higher region area's in the winter and in the early spring. In the summer it can be very warm to even hot for one's feelings. At this height the sun burns the skin more easily so caution is advised. Furthermore it is advised to travel lightly towards the citadel, the thin air makes you short of breath and thus any heavy supplies and equipment are carried upwards by locals who have adjusted themselves on living on great heights. 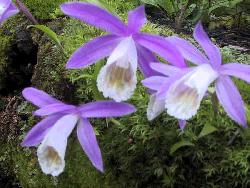 The lower area's of the region aren't of any interest to the monks living in this region.

What actually does gain their attention are the numerous of weeds and flowers growing on the mountain rocks. Local healers use the weeds to cure a varioty of wounds and deceases. 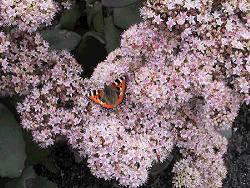 Formosana or Tor's Flower This interesting flower grows on the sunny side of the mountain ridges and this Orchid has a special meaning for the people of Seeklander. The flower resembles the 'bringer of light' and is often in one breath named as the flower of the Holy Tor himself.

It is a commoner belief that where these flowers grow a divine spirit has set foot. Picking this flower goes hand-in-hand with excellent care, since the flowers are fragile and sometimes hard to reach. The flower is only picked by the monks living in the citadel of the Shrine. Before, while and after the Formosana is picked, there are certain rituals performed by the monks to please the gods for taking such a holy flower from the mountain.

One could imagine that some rituals are extremely difficult to perform while hanging on a rope with nothing more than 3,000 feet of air beneath you.

While there are interesting flowers, plants and weeds growing across the region, there isn't one single flower as interesting as the next one.

Matrona or Key to Heaven It is a small, pale flower, not of any interest to man's eye at first. But a close dedicated study of the Seeklander monks revealed that this is truly the most interesting flower they've ever seen.

When the juice from the plant is extracted it can be used as an above average healing potion. It's powers are not limited to curing the flew, but it also cures infected wounds, all known deceases and it speeds up the healing process when used with other poitions.

Every once in a while new interesting features of this flower pop-up. Like that it appears to stimulate the mind making it easier and more effective to meditate. 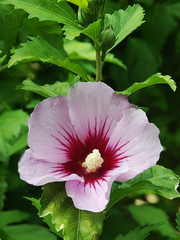 But this is still under heavy discussing by the monks, some belief that this effect isn't caused by the flower, but that it comes from the water that they drink, which flows directly out of the mountains. While others think the meditative aspect of the flower is the main reason why Tor has let it grow on the rocks of the Shrine of Seeklander in the first place.

Rose Althea or Eternity Rose It was originally brought into the region from Sirion by Duke Kihalin for his garden but the duke soon ordered the flower to be planted all over the region, especially around the main shrine in the center of the fortress because of similarities in appearances between the bloodstars and the flower.

Individual flowers are short-lived, lasting only a day. However, numerous flower buds are produced on the shrub's new growth,which provides prolific flowering over a long summer blooming period. The numerous flowers symbolize the expanding faith and its continued existance. The flower is used in ceremonies of Sanguis Astroism in special holidays, eatten by young children as a treat, and as wedding bouquets in weddings.

The driving force of the Seeklander economy is a combination its location on a north-south trade route and valuable herbs and other rare plants of the region. Traders mostly trade iron and gold coming from the mountain regions with food and other commondities from the Duchy of Gaston while some traders trade for herbs and seeds of native flowers of the region. Flowers are used to decorate the Sanguis Astroism temple located in the center of the stronghold while bars of iron are used to forge weapons for soldiers to guard the region from monster hordes.

Notable Sites of the Shrine 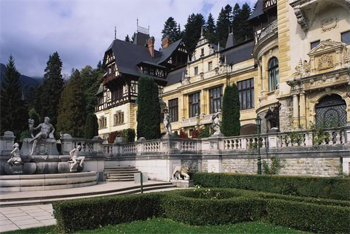 The Ducal Palace of the Duke of the Dark Mountains and Marquis of the biggest stronghold on Dwilight.

The Valley of Anguish

The Valley of Anguish is located to the west of the Shrine, a few miles outside of the stronghold. Hordes of monsters and undead creatures invade the Shrine through the valley. 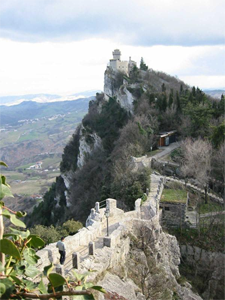 There are many stories of the origination of the Shrine of Seeklander, and several religious that hold the Shrine in high regard. The more prominent of them are related below.

From the Archives of Torenism

The religion of Torenism views the northern mountain ranges of Dwilight as holy ground - the site of the revelation of Tor's will to the Messiah Luna Dawnstar came to the west at the Mountain of Betrayal, and since then many Torenist events of significance have occured there. Because of this, in the early days of the faith, the High King Fisc Arylon ordered a grand shrine built in the shadow of the mountains. This giant steppe pyramid that was constructed there serves as a way point for Torenists traveling west to the mountains on pilgrimage - or more properly those who ware "seeking" Tor. This is the genesis of the name "Seeklander", for it is land set aside for those seeking Tor's grace.

There is something known to Torenists as The Seeklander Creed - this is an ecumenical Torenist statement of faith used by the laity of the church to declare their belief system to themselves, and to others. It is recited during each Toren Mass Celebration, as well as all formal rites of passage for the religion. The creed was drafted by the church leaders in the first days of Torenism, at an ecumenical council that was held at the newly constructed shrine in the region known as Seeklander - thus did that area lend its name to the creed.

Today, Torenists consider the shrine housed at Seeklander to be among the most holy sites on the continent, perhaps ranking behind only the Mountain of Betrayal and the holy city of Valkyrja.

Ancient histories of the mountainous northwest of Dwilight are rare and fractured. Many stories can be heard whispered amongst the peasantry of many ancient religions having used the Shrine of Seeklander over the centuries. None of the stories, however, claim to know of the origin of the Shrine, or even the origin of its name. Perhaps one day some ancient records will be found that hold the secrets of the Shrine of Seeklander.

Under the influence of the Sanguis Astroism

When Astrum took control of the fortress, most of Torenists were either converted into SA or driven out. SA purged and cleansed the fortress of all heretic. A SA temple was built over where the Torenist temple once stood. Many Astrioists consider the shrine as a great shield which defenses the rest of the SA regions from monsters of the western mountains. Under Duke Kihalin, three tall towers were built to symbolize the three bloodstars of the faith.

Lords who have ruled the Shrine of Seeklander

Kihali Knights - An Infantry center built during the Dukeship of Kihalin Lapallanch. The best weapon smith of Astrum was called to prepare swords of the knights. The knights do not wear heavy plate armours since heavy armours restrict movement.

Kihali Arbalests - A Special Froces center built by Duke Kihalin. Finest archers from the Shrine were gathered to go through intense trainings to use an arbalest.

Kihali Chevaliers - A Cavalry center built by Duke Kihalin. The smith who made weapons for the Kihali Knights was called again to prepare swords for the chevaliers.

Kihali Swordsmen - An Infantry center built by Duke Kihalin. The same smith who forged weapons for Kihali Knights and Kihali Chevaliers was called again for the Swordsmen.

Kihali Seekers - An Infantry center built by Duke Kihalin. The same smith was called once again to create weapons and armours for the Seekers.

Current and Former Knights of the Shrine