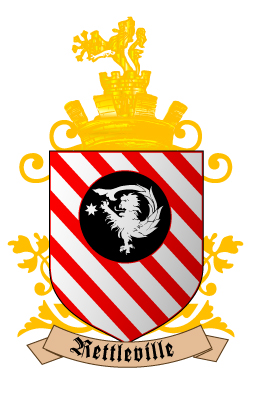 Rettleville is the former capital of Barca

Rettleville is a city almost completely surrounded by the woods of Rettlewood. The eastern part of the city borders a rocky outcrop and is otherwise inaccessible - it faces the inner seas of Dwilight in the distance where a warm breeze wafts through providing an otherwise stiffling atmosphere commonly found in dense woods. The air is thick and exotic and the people here have never experienced the chilling winds from the outer seas of Dwilight.

The only way in to the city is a clearing from its south-western walls which eases in like the poisonous snakes that drape the branches of the woods. The inhabitants have grown accustomed to the hardships of civilization in the dense canopy where food is scarce and must be sourced from beyond its borders. A small patch of fertile soil just north-west of the city provides the only sustenance of barley and wheat.

Visitors to the city have often wondered at the strange attire and habits of the inhabitants who display some trappings of civilization but also a tinge of savage passion for the environment as one would expect from those who not only live within nature but are at one with the spirits of the woods.

Since the dawn of time, an ancient civilization has populated Rettleville. It was an attractive place due to its geographic advantages. From the city you have a good lookout post over Rettlewood, and it offers safety from everything that lures in the dark Marwood. However little is known about the ancient civilization who inhabited the region. It is likely that the advent of many monstrous creatures caused the natives to fear the woods. Growing food was impossible and the gathering of food in the forest was very dangerous work. Many deceased due to famine to the point that the population was not large and strong enough to stop the advancing monsters. They were run over and devoured, ending their legacy.

Ordenstaat was the first realm to conquered the city after a very long era of rogue occupation. They build up the basic defences to survive against the monstrous creatures and undead scourge. The city grew and thrived under their rule, and due to the expanding of Ordenstaat the city became a safe haven for all people of Maroccidens. However, nothing lasts for ever. Due to their growing realm, political problems and strive divided the realm. A succession followed and Ordenstaat started to spiral down to the point that they only had Rettleville left. And the same inevitable fate befell them as the ancient civilization. Food was scarce, starvation followed, and monstrous creatures occupied the streets and eventually drove the nobility out, ending the rule of Ordenstaat.

After Ordenstaat lost control the darkness covered the city. Lots of people died during this period. It wasn't safe to be on the streets so everyone tried to hide and survive how they could. In the first Spring after Ordenstaat lost control over the city, a party of Giaskian nobility under the leadership of Julius Galvez made an attempt to colonize the city and found a new nation. With the combined support of Terran and D'Hara they fought back the beasts and eventually reached Rettleville. The colonization begun, and was successful. A new republic was born in Rettleville. The Republic of Barca. However the city lay in ruin. The population grew slow, but gradually. And over time, after lots of work and effort, new facilities, infrastructures and recruitment centres could be constructed to make Rettleville the proud capital of the Republic, which heralds an era of independence.

After 6 years under the rule of Barca, Rettleville had only seen some monster attacks. It seemed an impregnable settlement as it was only threatened by some monstrous creatures who were swiftly dealt with as they approached the walls of Rettleville. However, tension was building between Barca and Aurvandil over some defected Lords and the lands they own. Eventually Aurvandil was done negotiating and surprised the Republic by showing up with an army of 2.500 soldiers at the gates of Rettleville. The cities defence stood no chance, and the siege was easily won by Aurvandil. During their military occupation, they torn down the walls and combated around 3.200 citizens who gave their lives defending their homes. This was the first army to have ever besieged Rettleville under the rule of the Republic of Barca. 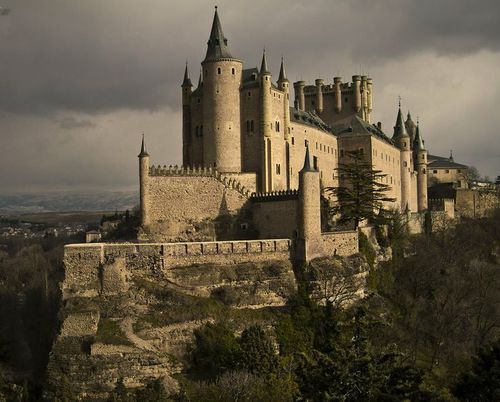 Castle Lantea, standing on the highest eastern hilltop of the Maroccian mesa upon which Rettleville is located.

If the siege of Aurvadil didn't already killed enough citizens, they attacked the city during the longest and most severe winter ever recorded on Dwilight. And in the period after they left, people were begging on the streets for food. Many citizens died due to hunger and starvation. Over the course of one winter, more than 8.000 citizens have lost their lives. In the beginning of the spring, the famine could be averted, however the morale of the people and their loyalty towards the Republic have never been so low. The people are virulent, and many small revolts against the vested authority followed, only to be put down by the local militia and loyal troops.

After the massive starvation and the siege earlier, the capital was relocated to Twainville in 19 YD. Not surprising, as the city was cut off from the rest of the Republic and the city was in decay. Duke Julius Galvez invested much time and gold in seeing Rettleville flourish again, and it did. During the reconstruction of the city's houses, walls and many facilities, also the Ducal palace was restored and expanded with the idea in mind that Rettleville would one day be the centre of the Republic again. About three and a halve years after the start of the restoration of the Ducal Palace, it was complete. The construction was complete a month after the Duke of Rettleville was elected Suffete of Barca, he named the palace Castle Lantea and since then serves as Royal Palace of the Republic of Barca, housing the seat of the Suffete of the Republic. Castle Lantea is the largest castle in all of Barca.