Welcome to Panabuk, heartland and breadbasket of the isle of Madina! Being the island's strategic center, one can go almost anywhere as every region connects to it save the remote mountains of Panamana and Madina city proper. The region is best known for its agricultural fields, running the length of the Pana Gulf, which contain the island's most fertile soil. Panabuk's primary crops are wheat, corn, oats and barley as well as other assorted vegetables. These crops provide the backbone of Panabuk's economy and are regularly shipped south to the markets of Madina Gardens and beyond. These shipments flow down a main road that runs vertically from Laraibina to the Gardens along Panabuk's eastern border with Lawataling's and Panafau's forests. A patchwork of horizontal branches spiderweb out from this main road across the province connecting all the various hamlets.

Currently, the region's small farming villages are grouped into two estates: Southfields and Skyfields. Southfields comprises all of the farmlands in the southern half of the province. Bordering the townsland of Madina Gardens, it is the more populated of the two estates and contains the manor of the Viscount. Skyfields, named after the Duke of Madina at the time of Panabuk's resettlement, comprises the region's northern farmlands. Dividing these two estates is the Pananont, the wildlands forest in Panabuk's center. While used as a local source of game and lumber, the Pananont remains Panabuk's most dangerous area. All too frequently bandits, monsters, and undead cross over from the lawless forests of Lawataling and Panafau and use it as a lair to strike out at the surrounding farms. Despite this relative danger though, Panabuk remains one of the safest regions on the island and a vital agricultural center. 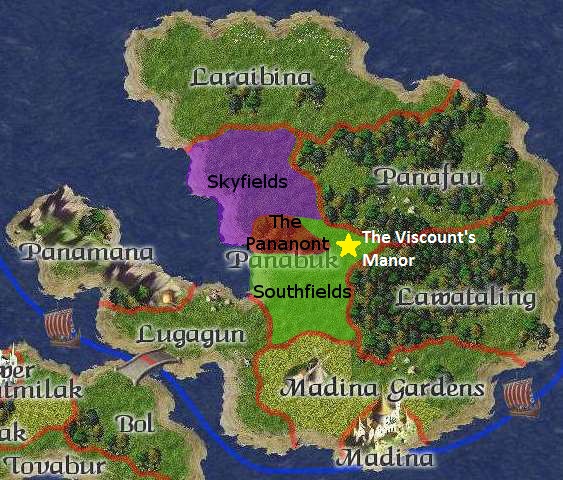 Panabuk is divided geographically into three regions. Two large, flat grasslands comprise the prime farming regions divided by a small forested area nestled in the middle. The landscape is dominated by broad meadows and lowlands and is remarkably flat and featureless.

Panabuk’s south mediterranean climate is characterized by hot, dry summers and cool, wet winters. While rather equable most of the year, the summers can be uncomfortable. Snow is almost unheard of even in the winter, which is mostly marked by heavy rains and muddied roads. These heavy winter rains, while essential for local agriculture, severely hamper travel during the winter months.

The main roadway into Panabuk starts at the bordertown of Madriona in Madina Gardens and runs upward along the eastern border. Travelling north, the road runs between the Viscount’s manor and the Pananont finally terminating at the border with Laraibina. Smaller dirt paths periodically branch off towards Panabuk’s neighboring provinces and the Pana Gulf. These roadways allow food to travel south to the Gardens for export to the wider world because there are no marketplaces within Panabuk. Most other large, regional infrastructure is built around or near the county seat.

The Guardians recruitment and training center is located at the county government seat in Southfields. Although temporarily shut down after Dwilight’s recent monster invasion, the center was reconstituted by the Viscount as part of Panabuk’s recovery efforts. The center regularly recruits restless young boys from small farming communities and turns them into men armed for war. The battalion uses training grounds in Southfields and the Pananont to train in open field, amphibious, and forest warfare. This makes Guardians excellent skirmishers although they are at a disadvantage in urban and mountainous environments.

Panabuk’s Ducal Militia are skilled rangers which patrol the rural countryside. They usually remain spread out across the province to defend the region’s remote villages. Originally established by the Duke of Madina at Panabuk’s takeover, the militia is under the direct command of Panabuk’s Viscount and maintained by regular recruitment from neighboring archery training centers.

Due to its central location, Panabuk has changed hands many times over the years. These regular shifts in rulers resulted in Panabuk historically being a sort of melting pot for the various cultures of Dwilight’s southern realms. However, Panabuk was especially hard hit by Dwilight’s recent monster invasion which caused significant depopulation of its many farming communities. With the original inhabitants virtually wiped out, the current thriving population consists mostly of Fissoan settlers. Additionally, the cataclysmic monster invasion, along with other internal events, has resulted in a strong religious revival in Panabuk. 75% of the province’s population are devout followers of Verdis Elementum. Even those in the most remote hamlets regularly travel to Panabuk’s Sepulchre of the Stone. This temple, while containing shrines for all the elements of Verdis Elementum, is specifically dedicated to the Domain of Earth and is known throughout the region for its Granite Hall of the Void containing a large stone statue of Radenem, God of Courage.

Much has been lost over the years and many documents destroyed during periods of anarchy, but the current reigning Viscount has begun trying to compile evidence about Panabuk’s past to produce an official history. Originally part of the Republic of Madina which first settled Dwilight’s southern lands in the Age of Colonization, Panabuk has played a role in the fluid politics of the south ever since.