Order of the Doughnuts/East Continent

The Order of the Doughnuts is a guild on the East Continent. Members come from many different realms united by a mutual love of doughnuts. Members live in peace with each other, except on the rare occasions when a fight breaks out over the last doughnut.

The Order of the Doughnuts exists to spread doughnuts, the love of doughnuts and peace throughout East Island. We want a guildhouse in every realm. Currently we are a southern guild, but we intend to spread north.

The Order of Doughnuts is not a military order. Its main goal is to bring the people of the island closer together by exchanging their cultures over doughnuts. However, if someone threatens us we will fight back with everything we have.

Holder of the Golden Doughnut

Current Holder of the Golden Doughnut

History of the Golden Doughnut

Come, grab a doughnut and pull up a chair. Let us share our love of doughnuts and our experiences. If we can talk over doughnuts perhaps we can put aside our swords and live in peace with one another. If not I will give you the doughnut of death.

We, The Glazers, will meet every week at the glazed round table and figure out new ways to add pounds to ourselves and our men, and finding ways to instill fear in our enemies by the fear of eating all of their profits from their regions production. We stand with honor, we stand tall, but we are mostly just wide. 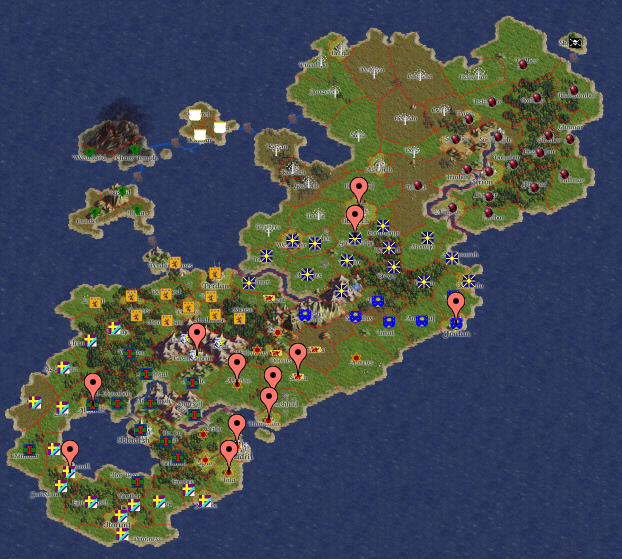 Semall is the home of another guildhouse. While less remarkable, the guildhouse is nonetheless magnificent and is host to very many types doughtnuts for all true connoisseurs.

Castle Ubent is the location of a more austere appearance on the outside. However, upon entering you will find the best serving wenches on the continent, to excuse the slightly worse quality of doughnuts.

Fontan was built by a longtime friend of Rackir. It was also the first main guild in the north.

Oligarch's guildhouse was built by Doc, a long time friend of Rackir. It was also the beginning of a long-awaited northern expansion. There is also a special doughnut produced here. It is glazed with a special oil, extracted from the most potent elven herbs. It is claimed that one doughnut will make any morning much more bearable. Whether this oil is legal or not remains to be answered.

Greatbridge owns the first and currently the only doughnut shop in Fontan. Located at a secluded lakeshore, the Greatbridge Doughnut Shop is maintained by former Chancellor Lady Lilith. Here one can hope to find some original tastes imparted directly from the Lady's homemade secret recipe, such as the Springy Series, usually served with a crispy layer of chocolate coating. The Almond flavor is the Lady's recommendation.

Supra holds the second guildhouse in Yssaria. Constructed by Sumsar, it is home to the "special room" at the end of the third corridor. There is Doughnuts ad libitum and both syrup, mead and ale from the taps next to the door.

Hamadan is also the home of a guildhouse, hosted by Rodon.

Tota is sponsored by Denver.

Al Arab is our main shop in Ibladesh.

Members of the Guild

With headings indicating rank in the guild, most important to least important. "Since (date here)" indicates the time as a member of the guild.

Rackir: Long johns with white frosting and raspberry filling
Is Est: Donuts filled with Bavarian creme
Meryl: "A bun with a smooth dulce de leche filling, all rolled in sugar could make my mouth water in the desert."
Achilles: Jelly filled ones that are strawberry and a fine frosting on the top
Rodon: Doughnuts covered with gold leaf and stuffed with lark's tongues and capon liver
Zog Returns: Filled with chocolate and laced with cream, and dunked in hot milk, served by a buxom wench!
Irias: strawberry filling and coated with honey.
Ryndhal: A simple, slightly oversized ball, with a light covering of sugar
Samson: the simple and unassuming glazed doughnut as my favorite doughnut.
Denver: Chocolate covered ones
Widfara: Maple Glazed doughnuts are pure heaven in a ring.
Sotel: Orange filled and glazed doughnuts fresh from Isadril and Mashad
Kevin: Glazed donuts are best, without a doubt
El'rith: A powdered, chocolate raspberry filled doughnut.
Ichigo: Either apple and spice doughnuts or chocolate with sprinkles.
Aurum: Creme(fruit) filled
Kamekaze: Lemon curd filling and a sugar and cinnamon sprinkling.
Basil: Blueberry jelly filled bismark
Akemi: glazed and powdered sugar