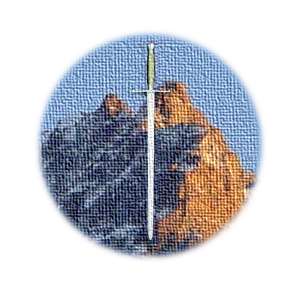 The "Mountain and Sword" Seal of the Occam Family. Pictured are unknown mountains from which the family first came, overlayed with the family sword, Occam's razor.

Created in the most central region in all of Atamara, the Occam family resides in Nazia, the capitol of Drachenwald. A family of some wealth, it produces wise and devoted troopleaders, who are free to swear their loyalty to any realm as they wish. Since the family name became known, Occams have been Rulers, famous Judges, Generals, Bankers, Dukes, Lords and more. The most famous of the Occams, Roland, organized the oldest and most widespread religion in the game. The Occam Family is one of the top 20 most famous families in the world, primarily due to Roland's honor and Gilead's cleverness.

Tyria Occam was exiled from the Occam family as a murderess. Since then, she has vowed revenge on her three brothers. She succeeded in arranging Deschain's death, and continues to plot to kill Gilead and Roland. Her plans did snag, however, when she was killed in a duel with Gilead. This isn't expected to prove too much of a setback, however, as the Greater Demons of Outer Tilog returned her to life.

The eldest of the Occams is Gilead. Dedicated to the improvement of his families honor, he pledged himself to the home realm of Occam; Drachenwald.

For years, he served as a model soldier and bureaucrat in the mountains. Serving in skirmishes against Falasan and undead, he established himself as a noble who would always follow orders, and always do his duty.

In the events leading up to the Drachenwald Civil War, he was unexpectedly made a key figure; being forced to choose between a promised Generalship under the Loyalists and following his loyalties to the former Prime Minister and rebel leader. Choosing to follow his personal loyalty to the rebel leader, he rallied other troopleaders to the rebellion, and was made Executor after the rebels claimed victory. Following his appointment, he wrote Gilead's Account of Drachenwald's History. It is the best known History of Drachenwald in all Atamara.

The Fall of Gilead Occam

After holding the office of Executor for many months, he was elected Dictator, and given a mandate by his new charges to seek peace. Talking with both the allies and enemies of his realm, he gained respect in the eyes of both, and began to mend the realm’s strained relations with its neighbors. It looked like Drachenwald would gain support from powerful friends, and be able to hold out against its enemies for many months. Alas, this was not to be. After a terrible defeat in Sauvia, he was taken by surprise by a one-man rebellion. The traitor Caliber Solo rose up against the legitimate government of Drachenwald. True to their duty, most of Drachenwald’s nobles joined the loyalists. In the end, Caliber commanded only 40 infantry, with the rest of Drachenwald’s armies siding with Dictator Gilead. Both of the realm’s infiltrators also joined the Loyal army, and one managed to wound Caliber. But then, Drachenwald’s enemies struck. This pivotal battle is detailed in Gilead’s Account of the Battle of Tarasac. Drachenwald’s army was decimated by the invading forces, and all their militia defeated. In the confusion, Gilead was wounded, and Caliber, even though he was wounded, claimed the throne as his own. Gilead found himself beaten and exiled from the realm he had served and loved his whole life, due to a rebellion of only 40 men.

Following the events of The Battle of Tarasac, Gilead discovered The Path of the Great Dragon. Devoting himself to the spreading of The Path, he changed his name to Gilead Draconic, and set off into the unknown. His first trip took him to South-East Island, where he refreshed his memory of warfare, and spread the word of The Path to both friend and enemy. Eventually, partly due to a disagreement with his always honorable brother Roland, Gilead Draconic abandoned his faith in favor of his older, pragmatic ways.

Wanting to set out his own and find a worthy cause, Deschain quested through all of Atamara, before finding friendship is Abington. After speaking with Galin, an average troopleader he had met on the streets of Riverholm, he pledged himself to the protection of Abington and its interests. For his years of devotion, Deschain was given the Lordship of Tarkhog, swearing loyalty to the Dutchy of Wayburg; the most influential and powerful duchy on Atamara. He served in the war in the Ash Sea, and gained the Lordship over Veshin when Tarkhog was returned to its previous owner. He was killed on June 22, 2006, defending a hill on his army's right flank. Unknowingly, he left behind a bastard daughter, Elizabeth Snow.

The bastard daughter of Deschain Occam, she was orphaned at barely a year old. Unable to use the family name, she set off to become an Adventurer on the Far East.

The youngest of the Occam family, Roland fought for Oritolon in the colonies. After a short time in the realm, he recived word from his brother that the family's quest for the greatest sword ever made on Atamara once again had a trail. Seeking it, he sailed to Mesh on Belluterra. Proving himself to be adept in combat, he served first as Marshall of Twillen, and then as the Marquis of Hoelorr. After learning about the Path of the Great Dragon, and the religion's dedication to Justice, he served two terms as the Supreme Judge of Mesh, before stepping down from his positions to found The Path of the Great Dragon as the first organized religion on Beluaterra.

The Occam family doesn't talk about Tyria. Exiled from the Occam Family at an early age for murder, she vowed to wreck destruction on her three brothers. It is rumored she played a hand in orchestrating the battle which killed Deschain. She eventually was killed by Gilead, but remains quite animated for a dead woman.