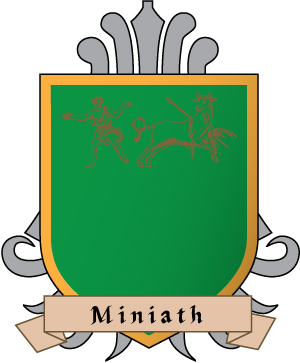 The most western portion of the Misty Forest, Miniath is filled with a heavy fog on most days. The northern border is filled with fishermen, the waters speckled with boats daily during the correct seasons. There is some logging done by the locals in the southern part of the forest, but the fog can be so thick that it was declared too dangerous on most days by the Countess Alydramia. Hunting, however, actually is the most preferred occupation by the local population-- the fog making it easy to hide from prey.

Before Niselur was lost, Miniath was known as the Huntress of the Mist. When King Turin regathered Miniath into the bosom of Iashalur, Lady Alydramia of House Altzra began to build Miniath back to her former glory.

Thus far, there are few noteworthy buildings in Miniath that have been built (or rebuilt) by Countess Altzra.

The Citizens' Inn actually stands at the gates of Altzra Hold, for all Citizens to be close to their Lady, if they so choose. It is whispered that the Countess will receive all Citizens' concerns-- if they are in the Citizens' Guild, a guild founded for Citizens by Lady Alydramia herself.

The Estate Trimina was built soon after the emergence of Sir Sanger Henshall, the loyal Steward of Miniath and Marshal of the Citizens' Guild. It is built in the same fashion of Altzra Hold, being one story but having at least ten bedrooms and a giant reception room.

There is a recruitment center for the Miniath Arrows, a group of young men and women who have been learning the bow. It is said they have been learning purely from one wise man who remembers the old ways of the Huntress of the Mists and eventually will become extremely strong archers.

The last noteworthy building is a small shack of Sanguis Astroism, the local religion.