This Realm was destroyed by Aurvendil in its war of secession. 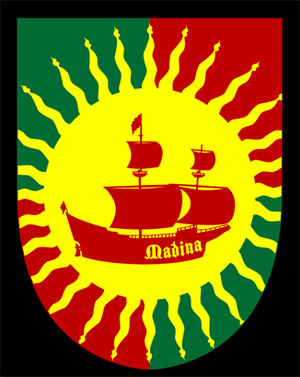 Coloured by the waves of its deep sapphire sea, its stunning coastlines of golden beaches, and its emerald oceans of palm trees, Madina is considered the most beautiful land in southern Dwilight.

However, don't let its beauty fool you. Be wary when entering Madina; you will have a hard time earning citizenship of these lands, and without it, you are doomed.

Madina is fit for only the toughest of nobles; it is no place for cowards.

Fare only upon it's harbours if you are completely certain of yourself...

The Isle Republic of Madina

An isolated realm, the Isle Republic of Madina remains a mystery to most outsiders.

While many know of it's existence, some far away nobles deign to think it a myth. However, every sea merchant worth his salt knows it's real.

They sail to Madina's shores to buy and sell their goods so weeks later they may sail home with a tidy profit in hand.

No one knows how Madina was discovered or founded although some merchants swear that it was the first Madinian Sailors who found the hidden sea routes to the great continent of Dwilight, and thus they claim Madina as Dwilight's first known realm.

They say Madina was founded by a Single crew with a cunning group of leaders who bumped upon it's shores by accident only to find rich sources of food scattered along the coast.

Whatever you believe, you can never be certain of it until you visit it's shores to find out for yourself...

Set sail to the lands of Madina!