A newly liberated region of Madina, Libba has come under the control of Samuel Quasath thanks to the generosity of Grand Doge Abbot Nosferatus.

Although it has a prominent and lengthy shoreline, it isn't a rich fishing region. This is most likely due to the high cliffs that make the ocean border. These cliffs, though acclaimed by locals for their natural beauty and supposedly haunted caves, make fishing close to shore dangerous. Most of the fishing boats go north into the bay.

The fields of Libba are rich in nutrients, making farming the primary job of the region. Farmers have the luxury of owning large swathes of land from which to reap their living. The weather provides lots of rain, thanks to the ocean winds colliding with the hot air from the north-west desert.

The horses of Libba are large and strong, perfect for long hours of plowing the fertile soil. These horses can be adapted for war with only minor additions of armour and a saddle. While they need some additional training to be most effective, their steady charge and heavy hooves will punch a hole through most defenses. They are the Libba's Field Rounceys.

There are *four* traditional dances in Libba. There are dances from three of the major villages in Libba, and one dance they all share. It's based around the seasons, and each village gets their moment throughout the year. The spring dance is from the mining village of Threepeaks. The dance is performed inside the hills to avoid the heavy spring rain. The summer dance is done on fishing boats off the coast of the Bacull village. It's much cooler on the water. The autumn dance is held in the fields of Salanch, celebrating the harvest. The final dance is held indoors, whereever and whenever a family feels the desire for a party during the cold winter months. It's a wild, free-flowing dance that depends more on mood than set steps.

The main center of Libba, this large town is also named Libba. Which place got the name first is a matter of legend and it varies from story to story. Although the population isn't as big as Salanch, everyone lives on connected streets, so Libba itself is a proper town. The region's skilled tradesmen all live here, and they export their goods to the far corners of the region, as well as outside.

Threepeaks is named tongue-in-cheek after the three hills it was founded near. Close to the eastern border near Drowenton, Threepeaks is a mix of hilly country and heavy forest. Libba's exported metals almost come exclusively from Threepeaks, and much of the local hunting is done in the woods. Deer are bountiful in summer. The horses for the famous Libba's Field Rounceys are bread in the hills aroud the town. A master smith and a veteran knight, arrived with Sir Evergreen from Ikalak, help with the equipment and the training of the troops.

Bacull is a coastal hamlet on the west coast of Libba. Nestled between some of the high cliffs, it is properly sheltered from the wind and rain. Their larger boats go out into the bay in the north, while their smaller crafts stay closer to shore and net both fish and grow clams.

A sprawling mix of fields and houses, the territory of Salanch covers thousands of acres. Held together by a mix of family ties, economic ties, and oaths, the spread out residences consider themselves one unit. They have made a local council to discuss matters that affect them all.

Hand-written map from a friend. 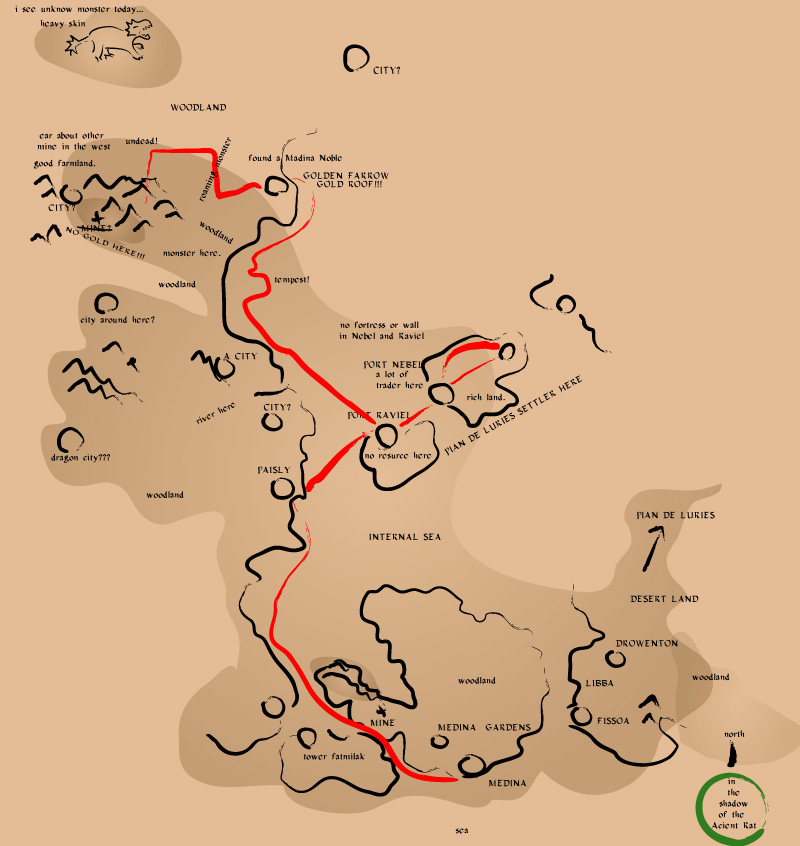