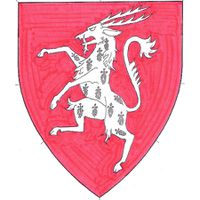 A small, unknown noble family out of Thysan. Hidden among dense woods and rippling streams, they take their name and their philosophy from the great Draco River. Every generation of Le Drakes has had to take to heart the words, "Patientia. Diligentia. Contego." They point to the quiet streams that feed into the Draco River as proof that standing together can accomplish something greater than acting individually. A Drake does not act rashly but quietly grows its strength, and does not raise its hand in offense except in the name of duty or in defense of a friend. They do not take their decisions lightly and act only when they are certain of their goals.

Most le Drakes do not follow any major religion, preferring their own counsel and philosophies to those of the land. They are wary of causing offense but are honest when approached directly. Recently, the youngest generation of le Drakes has started to take a more active role in the world beyond the forests of Thysan.

A monstrous antelope [1] with serrated horns, huge tusks and the tail of a unicorn adorns their banners. It is often depicted emaciated with a barrel chest, representing the family's self-discipline and pride. Its fierce disposition belies an unwillingness to act rashly, as it would prefer to stand its ground than risk harming another wrongfully. In early lore it was regarded as a ferocious beast on a level with tigers and wolves, as written by Edmund Spenser in The Faerie Queen [2]. Knights of the family have also depicted the Antelope surrounded by caltrops on their shields, a subtle warning that engaging them in combat comes with a heavy price.

The last remaining le Drake on Dwilight is also the most prominent, having risen from absolute obscurity to rulership of a small realm in less than five years. Born and bred for marriage in the name of advancing the family, her brother's obvious disinterest in inheriting the estate condemned her to taking his place. Were it not for the monster invasions that overwhelmed the Western half of the continent and forced its inhabitants to march East she may have remained in Thysan, the unwilling but dutiful matriarch of an unknown family. As it were the forced migration freed her from all ties of blood as the remainder of her kin fled to the Colonies, there to establish a new home in Alowca.

From the beginning she questioned her Barca's purpose: to strike hard and fast in the East, and claim a new home for themselves by the sword. Her sheltered upbringing left her unprepared for the realities of war, and she naïvely sought alternatives through a variety of means. In these early days she was recruited into the Great House JeRavosi, and there showed a talent for thinking outside established lines of thought. She vainly tried to educate herself on the world at large but was dissatisfied with what she regarded as narrow or biased views, particularly pertaining to the realm of Luria Nova. Her curiosity warred with her duty: what could the Lurians be like, that they were hated so?

Jocelin reached out to a few of their nobles, eventually finding a fast friend in a lord who would later become the Imperial Magistrate of the realm he served: Lord Aldrakar Renodin. She would not meet him for many years to come, and their friendship would be tested many times over, but they never stopped sharing letters for long.

Even though she opposed Barca's invasion of Luria Nova the young noblewoman joined in their assaults, witnessing the horrors of war firsthand. She found mentors in both Crown Prince Rynn JeVondair of the Great House Jevarosi and Lord Justice Erasmus La Pointe, finding that their mistrust of one another put her in the position of informing on and aiding both in their duties, ultimately withholding information that could be regarded as harmful for the benefit of both. Her relationship with the former became that of Father to Daughter. Her relationship with the Lord Justice took a quite different path.

At a critical time in the invasion the leadership of Barca fell to pieces. The journey East had been plagued with suicides by nobles bitter over the loss of their traditional homes: now infighting and war causalties reduced their numbers even further. The command structure fell to pieces, and the ensuing disorganization nearly destroyed that which they had managed to gain. The remaining refugees rallied under the Lord Justice, who eventually won the seat of Suffete and became Ruler of Barca.

The eldest of the (legitimate) le Drake children, Melot grew tired of the sluggish pace of life in Thysan and opted to set out for a life of adventure. He'd already boarded a ship to Tara before his family discovered his absence. Although their mother sent letters imploring his return, their father took a harsher stance on what he perceived as a betrayal. Melot's funds were cut off, leaving him stranded in a foreign land with no allies and a minimum of experience as an adventurer. He learned the adventurer's trade quickly, staying true to the family's principles of honor and protection of the weak. As his journey takes him further and further from home, Melot finds himself more and more intent on establishing a life for himself as more than the dishonored son of a small noble family.

By chance, one of the first battles Melot ever won was against a terrifying beast wielding a magic sword awash with flame. Although he took to calling it Drake's Fire, the sword didn't feel right in his hand, and he sold it to the cousin of his liege lord. Half a world away his sister Jocelin was rewarded for her brother's generosity by another member of the of Arescod family.

Born almost a full year behind Melot, Rue is the result of an adulterous relationship between Lord Damon Le Drake and a bewitching songstress who visited Thysan with her performing troupe. Despite Lady Teresa le Drake being found barren after the birth of Melot (a finding proven false with the birth of Jocelin many years later), her father had shown no interest in other women until Rue's mother came along. She came to perform at the family estate and in a single night had stolen the heart of the old lord with her musical talent and fair looks. Their flirtations were nothing short of scandalous, and no attempts were made to hide the budding relationship. Hurt by her husband's betrayal, Lady Teresa demanded the troupe be forced to move on; her husband grudgingly agreed. For more than a year they thought they had escaped the scandal unscathed... until a little girl was brought to the estate with a letter of love written from Lord Damon to the singer. There was no doubt of the child's heritage: she has the unusual amber eyes of the Le Drake line. Taking responsibility for his actions, the old lord adopted the child into his household (much to the displeasure of his wife). She received the name Rue out of spite from her adoptive mother.

Rue bears the Le Drake name only because she had no name of her own when brought to their estate. She knows this because she was reminded of the circumstances of her existence every time she spoke to a member of the household. Regarded as an embarrassment to the family, she followed her brother's example and left to explore the wider world beyond the woods of Thysan. She didn't get far before hearing of the attack her sister had suffered at the hands of a horde of monsters. Fearful of the worst she hurried home, and has since set herself up as a protector of sorts over the forests of her home. Of the Le Drake offspring she is the least handy with a sword, taking after her birth mother in the arts of music and intrigue.

Where Are They Now?

Melot is still in Tara. Having grown more accustomed to the life of an adventurer, he gleefully charges into combat with reckless abandon. He yearns to establish a name for himself and rise again, though this time by his own power. His education and knowledge of noble courtesies have held him in good stead. Jocelin and her men fought well for Barca, but a handful of poor decisions by the young commander cost all but her Captain and herself their lives. She is currently returning to Thysan to oversee the family's move from the deep forests to Barca's northernmost city, Chateau Saffalore. As for Rue, she is in Saffalore. Her poor combat skills led her to disaster: overwhelmed by monsters, she was left for dead, and recovered by an adherent to the red star worship common in the North. Clinging to the verge of death for many days, she has only just now started to take a turn for the better. The ordeal left her body scarred, and she now despairs of meeting monsters again in combat. Her thoughts have turned to her mother, and the obvious gifts the performer left her...