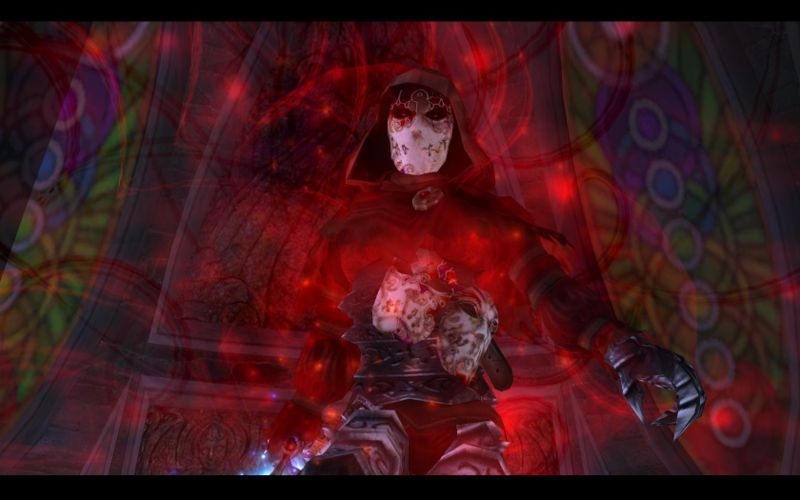 The earliest accounts of Beluaterra are purely legend, stating that it was a place of beauty and fertility. Then three malign spirits, manifested on the Earth came. They became known as the Daimons. They coveted Beluaterra and demanded that all men bow down before them. When the people of Beluaterra refused, The Daimons burned Beluaterra until the earth was black and the air was choked with smoke. They demanded obedience a second time, only to be refused again. As their next of punishment, The Daimons raised the ocean into the sky and flooded the land. A third time The Daimons demanded that men worship them, promising to usher in an age peace and end misery. But the few remaining people stood strong against The Daimons, and refused a third time. So The Daimon twisted their minds, until brother slew brother, parents abandoned children and friend killed friend. Finally the people of Beluatera conceded, and bowed to the court

In the days where people suffered under The Daimons cruelty, a boy was born, not from the living but from a corpse, a pregnant woman who had been hanged. A band of mercenaries found him, took pity on his existence and took him with the band of mercenaries. They named him Avo, and he would become the key to Beluaterra's salvation. Little is known about Avo's childhood, though it is a matter of historical fact that he was razed by mercenaries to be a mercenary, fighting in battles and collecting pay when he came to adolescence. By the time he was entering late adolescence he abandoned the mercenaries to begin travels and deeper training in more ways than the life of a mercenary could ever provide for. As a grown man he amazed many with his powers of mind, by which he was able to protect his village and perform feats that a dozen other men could not equal.

Avo eventually grew obsessed with overthrowing The Daimons and ending their tyrannical rule. One night when he was consulting an old and mysterious tome, he was suddenly transported into The Netherworld. Here he met The Necromancer, who was sat on a throne surrounded by ghastly figures. As the Daimons tried to corrupt his mind and enslave him, but Avo fought back, stealing the Necromancers sword (The Solus Greatsword) and escaping The Netherworld.

Fall of The Daimons

"Bring the children! Ring the bells! A unique site for all to see! This man who evil he dispels, With piercing rays of purity!"

Avo scaled the peak of Nurarihyon (Beluaterra's highest mountain) and challenged The Daimons to combat. Summoner Of The Monster swarm was the first to appear, and with the Solus Greatsword, Avo destroyed him completely. The Necromancer was the next to appear. They fiercely struck at each other, until Avo broke the Necromancers body; who escaped into the Netherworld, to fight another day. The Warlord Of The Netherworld was the last to appear. For weeks their battle raged across Beluaterra. Nurarihyon was destroyed and many smaller mountainous regions were formed by the ruins. Finally Avo slew the Netherwold Warlord, freeing the people of Beluaterra from their yoke. Though many invasions have been sounded against Beluaterra as they attempt to reclaim it.

After the fall of the Daimon rule, Avo set about rebuilding in the ruins, the peasants, in awe of their saviour agreed to follow Avo as he created a new kingdom across Beluaterra, which encompassed much of central Beluaterra, known as Albion (sometimes referred to as Avo Mar). The line of monarchs that followed Avo where called the Archon, that being the official title. It is unknown what the title means, merely accepted that it is a royal title that Avo himself took. The capital of Midland was called Vritanis, a city based around a massive tower, the tower was a place of worship and a palace.

"And the reign will kill us all

If we throw ourselves against the wall

But no one else can see

The preservation of the martyr in me"

"Tenacity" Strength of mind, the ability to stick to one's purpose.

"Frugalness" Economy and simplicity of style, without being miserly.

"Gravity" A sense of the importance of the matter at hand, responsibility and earnestness.

"Respectibility" The image that one presents as a respectable member of society.

Avo is the central God of Heroisticism, though there are many other figures in our theology. He was a hero, who spread the ideas of the life of a hero and its virtues. Because of this we, ourselves strive to be heroes, living by the Heroic Virtues he once taught.

Avo reforged the Solus Greatsword, imbibing the power of the Daimons who died fighting it, and all the souls of Heroes saved from the Netherworld. He named this new sword - Avo's Tear, and left it as a relic on this Earth should a worthy hero rise once more.

Skorm, considered to be the opposite of Avo and the paragon of Evil, while Avo is the paragon of Good. Those who worship Skorm are referred to as "Ex Nihilus", meaning Of Nothing; while those who worship Avo are referred to as "Ex Deo" meaning of God. It is unknown when worship of Skorm began, but it is known that the Worshippers of Skorm and Avo once had a war to spread their religion and to end the worship of each others mortal enemy. Nobody knows about the younger years of Skorm, though he arose to repute through his brute strength and Guile. During his life he went on to forge great wealth and a support base of the fearful, seeking protection and the powerful seeking greater power.

Skorm is also known as a necromancer, his abilities to induce death and reverse that are entirely attributable to his affinity with Daimons. Though Skorm is further reputed to have been the killed of the Daimon King Nostro. Skorm went on succeed Nostro in ruling his Kingdom of The Dark Isle until he was killed by the Falcon Of Light, Femto.

Here is a list and biography of great heroes, worthy of repute and noting.

To see relics of the heroes view the Albion page.