Galadia is a mountainous region in central Atamara. The rocks are the main resource, providing metals and stone. Farming is limited to a narrow strip of lower hills in the north. It is a landlocked region, with slight impact of the Central Lake on the weather. Galadians, as highlanders all over the world, are proud people, hardened by the austere environment. They are not easy to be won, but once trust is built, they are loyal to death. 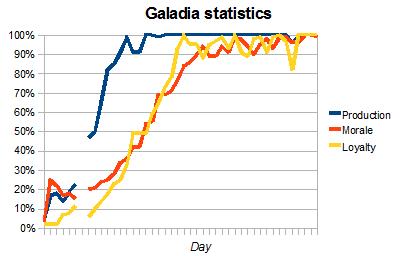 Galadia's growth under Caris Silesian, collected from day 1 until day 48.

Galadia was for a long time part of Falasan. It became a province of Cagilan Empire, along with other regions of the Duchy of Barad Falas, as a result of a long war between those mighty realms. Galadia was in very bad shape, having suffered from the long war, with non-existing production and very low morale and loyalty. The peasants of the mountainous region were quite stubborn and did not change loyalty easily. With the help of an army led by Lord Enri Kinsey and a number of Courtiers, most notably Lord Shiro Motosuwa, former Viscount of the province, and priets from the Order, Caris managed to bring order within 3 weeks.

When the work put into the region started to pay off and Galadia's knights started to receive decent income, Viscountess Caris constructed a small temple of the Order and a guild house of the Imperial Movement. The latter had to be build twice, as the first building disappeared in un-explained circumstances. (the second building is under construction)

Later, Galadia became a part of Coria, a new realm to be created on the basis of the Barad Falas Duchy. Out of Coria grew the Kingdom of Silnaria, of which it still is a part today.

Records from times before Viscountess Caris were lost during war

Galadia produces little food, but is rich in stone and metal ore. Some peasants hunt, but this is limited to few valleys.