From BattleMaster Wiki
< Everguard
Jump to navigation Jump to search

The Wars of Everguard are the collected conflicts undertaken by the realm. Everguard was by historical standards a new realm, and as such it did not engage in large scale nation to nation war, but as time went by and more territory was consolidated under the control of man, wars seemed unavoidable. The most important wars in Everguard's history were the Expansionist War Against the Monster Hordes, which has seen Everguard expand its territory in all directions while fighting against the black beasts that were to be found in the west, and the War of Astrumese Aggression, which saw the death of Everguard.

Expansionist War Against the Monster Hordes 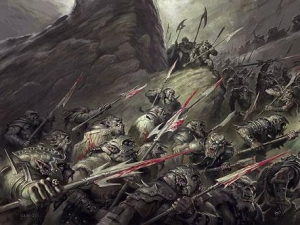 In the earliest days of Everguard, it was but a small settlement in the extreme north of Dwilight, unable to challenge the established nations of the continent. The nobles knew if they were to truly acheive their manifest destiny of consolidating the westlands of Dwilight, they would need to strike out into the black unknown territory - areas that no man had mapped, and no noble knew.

At first, this expansion went smoothly and easily. As Everguard moved to neighboring territories it experienced no resistance - but such unchallenged growth would not last long. As the founders of the realm had moved toward Valkyrja, they had encountered a number of raiding parties of Dwilight Monsters, a form of beast that men had not encountered at any point in any of the world's other continents. These twisted creatures had dark skin of black, faces of animals and a vicious strength that seemed twice that of monsters that men had faced before.

But the nobles of Everguard were rough men. After the realm was founded, nobles would encounter small party of monsters, and the men of the realm so used to constant, bloody warfare from their time in other lands, had little trouble disposing with these black beasts. As their territory stretched and grew, however, Everguard began to meet more stern resistance.

The further to the west the realm pushed, the larger the number of evil disfigured monsters they encountered. On more than one occasion, the swarming numbers of bloodthirsty raiding parties threatened to wipe out entire armies of Everguard soldiers as they attempted to take surrounding land. Invasions of monsters into realm territory began to happen nearly every day, and Everguard's attention began to change from simply expansion, to maintaining their own survival.

This war continued until the day Everguard passed into history. The High Kings did not believe the invasions would end until such time that human settlers begin to found and expand strong reams around Everguard, hopefully driving the monsters back into the sea.

The War of Astrumese Aggression

As the spring began to thaw the ground in 2009, so too did the swords of northwestern Dwilight. The realms of Astrum and Everguard were allies, and had previously had a strong working relationship. Everguard had finally, after a long, bitter struggle with the black beasts that had constantly invaded their lands, begun to get itself permanently established and able to protect itself, making it possible to finally expand into its previous territory. Everguard had once commanded twelve regions spanning from Valkyrja to Eidulb, and while the southern expanse would no longer be available, the realm was eager to move northwest toward Gaston.

Astrum, on the other hand, was feeling trapped in its corner of the island. Everguard cut off any northern expansion it could legitimately attempt, and its western front was blocked by the great continental mountains.

And so, using the pretext of a need for food (even though High Queen Averyll Arete had offered food shipment assistance, and a trumped up charge of religious rule breaking, Astrum dissolved its alliance with Everguard, and attacked the holy site of the Shrine of Seeklander.

Everguard had previously been in a position to finally solidify its borders and expand after much work to fend off the black monsters, however they were still not in a strong military position. Astrum, on the other hand, had to face no similar threat of monsters, and had the opportunity to stockpile wealth and military power. This set Everguard at a massive disadvantage, which it was never truly able to overcome. Had the war broken out only a few months later, it likely would have gone very differently.

The Astrumese pressed inward, taking the surrounding territories and pressing in toward the Capital city of Gelene. There the Guardian armies made a final stand, fending off the Astrumese for weeks. For some time it looked as though they would be able to repel the invaders, however Astrum was able to take the Outskirts, choking off any ability for the Guardians to leave the capital.

After much blood, the peasants of Gelene grew weary of the bloodshed. Sensing their ultimate defeat, they revolted from the arms of their beloved realm, and turned themselves over to Astrum. This wiped out the Capital of the Emerald Kingdom, and for all intents and purposes destroyed the realm of Everguard.