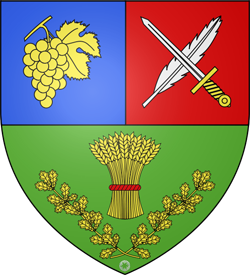 Blazon of the County of Duil

Duil is a province of vast green fields only having a few hills on the north as its starts to border the Mountains of Remorse, farming is the essence of the region as it is fertile and has abundant rains, the large plains make settlements distant from one another and most are little more than small communities of farmers, the largest being Duil near the center of the area.

The region produces mainly wheat, apples, grapes and oranges in the plains, and rice on the hills which is also where sheep and cattle of the region is raised, the subtropical climate and frequent raining ensure production levels stay stable through most of the year.

Trade is also widespread, both internally between the villages and with the other provinces around, Duil helps sustain Eidulb and its outskirts with much of its production and as a result the farmers prosper.

The people of the region are made of the native Dulesians like most of the area around, and as such they are proud and reclusive, with light olive skin and thin features. However the region has seen a great influx of immigrants from all over eastern Dwilight and after many minor skirmishes they are finally accepting each other, breeding a new culture that values honesty and hard work above all else, welcoming to immigrants but still highly distrusting any foreigners who have no intentions of moving to Duil.

http://freepages.genealogy.rootsweb.ancestry.com/~hindorff/graphics/griffin.gif
The blazon of the county was designed by Count Telamond Orgauth
The Colors:
Blue stands for truth and loyalty but is also the color of the northern hillsfolk, the red stands for stregth and greatness and is also the symbol of the townsfolk of Duil, and the green stands hope, joy and family being the color of the farmer communities.
The Symbols:
The golden grapes stand for abundance of hapiness and peace, and also depicts one of the key fruits of the province.The crossed sword and pen represent the military and the administration of the province which are centered on the towns and protect the county. The wheat garb surrounded with laurels stands for the prosperity the people of the region fought so hard to achieve.
The Amulet:
The Amulet isn't formally part of the blazon itself but the population and the current count are proud to include it nonetheless for it's the symbol of the Silver Order founded by Count Telamond on Duil, the province is home to its first guildhouse which will be commented further in this same document, since its foundation the Order has supplanted the local militias as defenders of the province and work hard as one of the most efficient elite patrols.

http://www.greylight.org/images/bloodstars/austere_Bright.png http://www.greylight.org/images/bloodstars/maddening_Bright.png http://www.greylight.org/images/bloodstars/auspicious_Bright.png
The dominant faith is Sanguis Astroism and no other "official" religion is estabilished in the province, but constant trade with the northern regions of Caerwyn often bring traders who follow Verdis Elementum in, but they keep they keep their pratices private as Astrum forbids preaching any faith besides the SA.
The isolate nature of the province however contributes for the survival of the original pagan faiths mixed with the worship of the Bloodstars, most priests however care little for these minor rituals and beliefs and know there is little they can do to prevent that with huge amount of distant rural villages.
Only one significant temple is located in the province, its a small SA temple on the town of Duil, it stand on the western part of town and is known by the locals as the Temple of Harvest, mainly because the whole region flocks to it from time to time to pray for better harvests.

The region's climate is similar to that of Eidulb but the fact its south of it and closer to the center of the continent makes its temperature slightly higher and snow even rarer.
Duil is a natural paradise that remain pretty much untouched by the devastation inflicted upon some areas, alas the region's diversity and richness has only been improved by the increased human population who with relatively small settled areas has raised more animals and brought new fruits and cereals.
The key to the preservation of the province is its small and sparse population spread in a large area, the impact caused by human activities such as hunt is minimum, Duil the capital largest town barely has more than 800 people.

The Silver Order was founded on Duil by Count Telamond and its first hall known as the Silver Hall stands near the center of the town, but the influence of the paladins on their home province goes further than the limits of the building and most military and bureaucratic adminastration of the province including the patrols have joined the Order and received special training and euqipment.
The Hall on the town of Duil became the administrative building from which patrols are sent to protect the entire province and taxes are collected as well as the Count's part of the peasants harvests.
Being elite troops Duil is becoming one of the safest provinces on Dwilight, free from both bandits and corruption, few paladins can be bribed and those who do are soon cast out of the Order and banned from Duil.