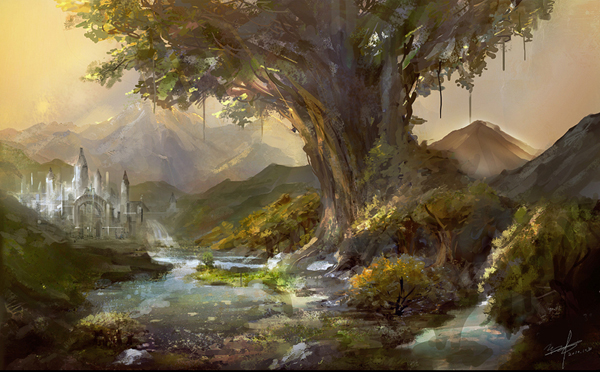 At the beginning, the world was full of water. The vast ocean covered all of the earth. One day, a star fell from the sky into the dark ocean. The star was a small seed which grew into the tree of the beginning, 'Iniarbel' (Initium+Arbor). As the tree grew, it drained the ocean and revealed the earth beneath it. When Iniarbel matured, it had nine branches and nine roots connecting the sky and underworld. Each branch lead to different celestial planes beyond the sacred veil where celestial divines resided while each root lead to chaotic planes of terrestrial divines.

It was Aerosa who first descended from her plane to our world. She was the one who blessed Iniarbel with life, covering Iniarbel with leaves. When leaves fell they took shapes similar to the goddess. They were the children of Iniarbel born from its leaves or 'elves' in the old tongue. As more leaves fell from the great tree, the land was populated by elves. They built their houses around their father, Iniarbel, and built temples of Aerosa, the divine mother of all elves. However, elves could not live too far from Iniarbel as the world was too cold and harsh. The divine mother, Aerosa took pity on elves and visited the plane of light where Nohl was watching elves from his golden throne. Nohl promised Aerosa he would stay in the world of elves if elves promised to worship him in return. Elves heard the words of Nohl and built their first temple of worship in the east of their father. Nohl was pleased by the construction of his temple and appered on top of his temple to brighten the world. The world became a warmer place as the sun radiated heat all day. Elves praised Nohl for his work until the world became too hot.

Elves cried as all the water in the world began to disappear. Nohl did not move from his temple top as he promised however. That was when the cries of elves reached the sky, Aerosa descended to the world to tend her children once again. She decided to move the earth itself to stop Nohl from shining down on the same land for too long. While the ground moved away from Nohl, it became darker again. That was when Goddess Izula descended from her world to light the night sky of the world. Izula simply watched over elves from the sky unlike Nohl who revealed his fiery presence. Nohl's presence overshadowed Izula most of the times. Only once every month, Izula would show her true appearance.

(ooc: Some divines are left without any description for those who are interested in working on them. Also do add more if you think your divine will make things interesting.)

Aerosa – Mother of the four Goddesses of Seasons. Patron Goddess of Nature, and Caretaker of Forests. Motherly Love and Fertility.

The Nine Terrestrial Divines-Reside in the Underworld

Jaqundir – Avatar of Sloth, Host of Banquets, Whisperer of Omens.

Retarte - Avatar of Desire, Goddess of the Earth, Physical Love. Mistress of Massacre.

Emolris - Mistress of Fire, Goddess of the Burning Abyss, Purity and Disaster.

Xeph'Eul - Avatar of Terror and Agony, Bringer of Doom, Tormentor of the Dead.

Zevoa Felis - Avatar of Domination and Conquest, Father of Men, Master of Iron.

Aram Nuu - 10th Celestial Divine, The Fallen One, Avatar of Ruin and Ash, Master of Blood, Ruler of the Ashen Dome.

Aienheint - Avatar of Balance, Lord of the Silver Fountain, Ruler of the Marble Castle.

Pemonhark - Avatar of Trickery, Lord of Endless Riddles, Ruler of the Shifting Maze.

Mir Atal - Avatar of Destruction and Power, Lord of the Deepest Depth, Ruler of the Crevasse of the Void