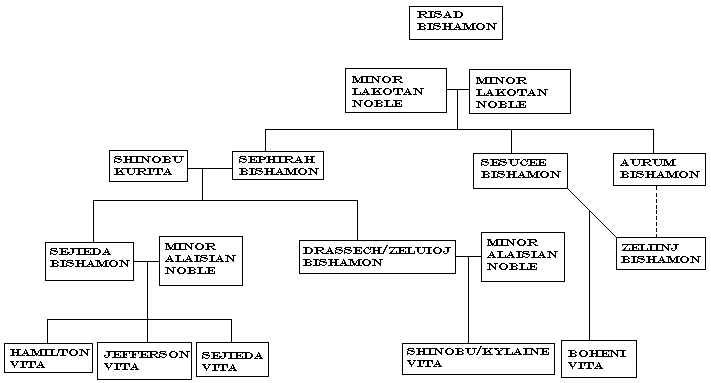 Beginning of the Family

Sephirah, Aurum, and Sesucee were siblings raised by Lakotan nobles. When the family finally reached enough money to educate them to the appropriate degree and sent them to give the family a better name, the three siblings set out to become major nobles of the land. 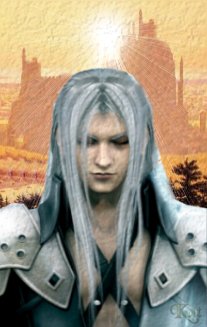 Sephirah with Alaise in the background

The oldest of the siblings, Sephirah just wants to settle down. He protect his realm and family through military service. Sephirah serves his home realm of the Cagilan Empire. Shinobu and Sephirah were wedded during a wedding-tournament in the exotic lands of Talerium. Since then he has been appointed Baron of Alaise. To show his gratitude, he has become a hero. He also joined the esteemed Order of Ered Luin. As a lord of the Cagilan Empire, he is now a member of the newly created Imperial Senate. He was an influential politician when not on the battlefield who often espouses his opinions on various matters of discussion within the realm, the Imperial Senate and privately.

However due to a terrible sickness, he lost his lord position and due to a serious of political defeats, his influence was crushed. Finally, he left the Order of Ered Luin due to the belief that he was betrayed by them in his bid for Prime Minister, which was won by Vengeance.

The middle child, Aurum, left his home and moved to Yssaria on East Island. He squealed in fear at his first battles, however his troops never noticed and he thus earned a larger than normal share of prestige and honor in his first few battles. Aurum then moved to Itorunt and became a trader earning an opulent, lavish lifestyle. He refused any military unit, even a bodyguard unit, insisting that war will cause the destruction of mankind. Aurum has deposited the most gold in the family coffers. Aurum left temporarily to attend Sephirah's wedding, but then returned to Itorunt.

He was given a job as co-editor at the Itorunt Informer. Aurum temporarily fought in the army in order to raise enough honor and prestige to call for a peace conference to end the Great War on the East Continent. This idea has since failed. He is no longer co-editor of the Itorunt Informer because he is now legally a member of the Light of Fountain. Aurum is a proud member of many various guilds across the continent. His favorite guild is the Order of the Doughnuts. He once spent so much time sampling dougnuts he was compared to a doughnut hole itself in regards to his plumpness. He hasn't lost the attribute either.

Aurum too was struck by the terrible sickness. He lost all his contacts and was betrayed by his co-conspirator, Widfara. With that he wanders about, looking for gold, wondering what to do with his life. It is rumored he might return home, but no one knows for sure.

A portrait for one of Sesucee's unknown lovers

The youngest sister, Sesucee was biologically part of the family. She was uninherited and she was surviving on her own. However, she often wrote to both her brothers. Sephirah, who uninherited her, treated her like scum. Aurum, who would rather that Sephirah and Sesucee get over their issues, treated her with a little more respect, yet couldn't understand her evil ways. Sesucee was a troopleader in Sandalak on the South-East Island, but immigrated to Beluaterra and joined Fronen Colony, later named Khthon. According to Sesucee's opinion, Khthon collapsed due to Predbjorn II's treachery. Sesucee then lead the "March of Mourning" to Fronepu. She hoped to return to Khthonian lands in order to avenge the Khthonian people suffering under Plergoth. However, Sesucee moved to the lands of Sint, which formed into a theocracy. She fought against the idea of a religion every chance she got. Sesucee was finally appointed Baroness of Binoroamet. Unfortunately for her, she died at the hand of civil engineers while trying to turn Binoroamet against Sint.

Drassech, Sephirah and Shinobu's son, was born to be another loyal troopleader of the Cagilan Empire. He grew at record-setting speed due to Remarque's alcohol refining process. He has since recieved revelations from the Naicato and therefore changed his name to Zeluioj. He too is a member of the Order of the Ered Luin.

The final victim of the deathly sickness. He too recovered. His life too was drastically changed. In his absence, a backstabbing religion, The Order, was founded in Tarasac, capital of the world. It was sponsored by the Order of the Ered Luin, so Zeluioj too left this guild. Since then he has been trying to officially found the religion, but with little luck so far.

Younger child of Sephirah and Shinobu. Currently residing in the family home in the mountains of Alaise. Not much is known as he has lived a private life in the mountains. It is said he has a very reasoning, tactical mind though.

A bastard son of Aurum and a prostitute, he was conceived and born in times of distress for Aurum. Aurum feared dying with no child and therefore, conceived a son after many tries and shipped him away from the East Continent. He landed in Hirzmet of Sint. Unfortunately without papers proving his nobility. Therefore, he is working among other adventurers to prove his nobility and earn his place. He also has a strong vendetta against his many perceived enemies of the family and seeks to mete out justice.

Sephirah died an old man feeling he had been betrayed by the realm he loved and betrayed his family. His relationship with Shinobu, his wife, was never the same from their first youthful romances.

Aurum returned home to his brother's residence and was bitter about his betrayal, but slowly began to realize he had reaped what he had sowed. His influence upon EC politics is often forgotten and understated.

Zeluioj married a minor noble who believed in Naicotism. Together they had a daughter: Shinobu, named after Zeluioj's mother. Zeluioj committed suicide claiming honor with a broken heart as his reasons. This further caused his father, Sephirah, to feel as if he had betrayed the family. His wife died a week later crying herself out upon his grave. The cause was never determined but the family claim it was from a broken heart. Their daughter was given to Sejieda to care for.

Zeliinj disappeared and was never heard from again.

Sejieda lived on in his family home, and did his best to protect the family's name. He studied, managed his family's estate, married a minor noble of Alaise, and had several children. The oldest were Hamilton and Jefferson, twins. They had another brother, but his history was short and he is not discussed. Finally, they had a younger brother named after his father. The older Sejieda moved the family home to Tabost before having his sons depart into the world as the newly formed Vita Family. The older Sejieda died feeling he had redeemed his family's name and had trained his sons to continue his work as best as possible.