The Seventh Age of Beluaterra

The period since the end of the Sixth Invasion and to the present day.

The Seventh Age of Beluaterra lasts from October 2017 until present day and is split into three periods: the period of rebuilding, the inhuman infestation, and the period of war.

The period of rebuilding starting in October 2017 and lasting until May 2018.

It was primarily a time of rebuilding, and is famous for the rebellion in Fronen that created the splinter nation of Bara'Khur.

Another major occurrence during this Age was the growth of Obia'Syela into a major power that would help to reshape continental politics.

War was heating up between Bara'Khur and everybody else on the continent when the rogue monster and undead swarms began to ravage the lands and bring every nation to the edge of destruction.

As previously noted, the primary war (from Nothoi's point of view) was the rebellion of Bara'Khur from Fronen. The Religion of Daishi was greatly concerned with this as well due to the rise of the cult of Mordok that burned Daishi temples and worshiped Daimons. Though Mordok claimed they did not worship Daimons. Merely their creator.

Another major conflict was the Gotland and Angband conflict. Gotland claimed Angband lands as their own, and Angmar often marched to protect their Angband allies.

The monster and undead rampage beginning in May 2018 and lasting until November 2018.

This Monster and Undead Infestation lacked the central organization of the Third through Sixth Invasions. There were no great Daimon leaders announcing an Invasion and heralding its end.

It was much more like the First and Second Invasions in that way, since there was little Daimon involvement at all. It was first noticed as an upswing in general rogue spawnings, but quickly became a plague that would ravage the entire continent.

Monster swarms of thousands of rogues marched across the lands, hitting anything in their way, day after day after day. It was an unrelenting infestation that smashed every realm back to their capital cities and utterly destroyed some when their walls finally failed.

It was an Age of Magic, and the stories of its use by humanity are legend. The Witch Kingdom of Angmar made magic rain on Wudenkin like a thunderstorm so powerful that it broke the city. The backlash changed the very way magic worked on Beluaterra. Many people had their ability to use magic burned out of them. And those who once practiced it with ease found it much more difficult to maintain. The portal stones of power became far too dangerous for even the strongest to use without fear of death. The Wizards and Sages that roamed the lands became increasingly difficult to find. And even the magical swords and shields that many nobles have long used against our great enemies have begun to fade away. The Cataclysm of Wudenkin was the greatest horror of the final days of the Age of Magic. May its like never be seen again.

Character Commentary on the Infestation

--The following is a Nothoi-centric summary of the Invasion from the perspective of Yao Ling, High Priestess of Daishi--

Luckily for us the Seventh Invasion was more like the First and Second Invasions. Just unending hordes of monsters and undead who washed over our lands again and again and again to destroy our farms and turned our cities into islands of order in oceans of chaos and death. There were no great Overlords to negotiate with that time. It was just mindless death and destruction washing across every land.

It killed Fronen. Yes, I know, the rebellion of Wudenkin and Mordoc started their slide, but they could have survived just that. It was the undending wash of undead and monsters that wiped them out in the end. Them and other nations. It nearly destroyed us, too. Dyomoque fell. Creasur fell. Even Reeds nearly fell to the unending waves of attackers. The Seventh Invasion was in some ways easier than others. There were no Daimons we could negotiate with. Just a sea of monsters and undead that ravaged everything around them.

The fact that we survived is amazing.

--The following is Yao Ling's remembrance of the Cataclysm of Wudenkin--

I wasn't involved in the planning, you understand. I didn't know the Witch King of Angmar planned anything like it. His vision was amazing. And horrible. I could feel the very fabric of Beluaterra quiver as he unleashed that thunderstorm of magic on the city. I ran there as quickly as I could, to see what happened. It was...truly horrific. The people were shellshocked. Even after the Daimons stepped in and...refocused the magic on those who attacked their followers. They couldn't forget what happened. The rains of fire and lightning. The screams of pain from the wounded and dying. The crumbling walls. Wudenkin never fully recovered from that night. It fell to the mindless monsters and undead in time, the last dying embers of the Age of Magic. May we never see anything like that night ever again. 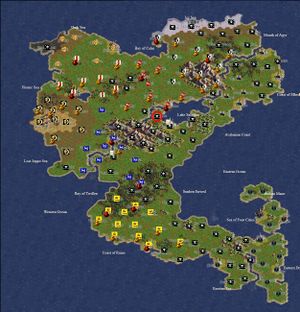 The Period of War starting in January 2019 and until present day.

The Inhuman Infestation had ravaged the continent and destroyed Fronen and Bara'Khur. Every other nation had also been brought to the edge of destruction by the time it ended.

Great magics had been used, and stories still abound of when Angmar made the magics rain like a thunderstorm on Wudenkin and opened it up to the final rogue push that would destroy it.

But those stories are the past now. A relic of an Age that is fading. We are entering an Age of Reason now. The mages and wizards have faded back into the background, and the great portal stones of power are all but impossible to find now. The great magical swords and shields that any noble of worth use to carry against Daimons in combat are fading into obscurity. There are fewer of them each day than there were before. More of them fall apart or are lost, and fewer of them are found by our loyal adventurers. The Age of Magic is fading, and perhaps one day will be seen as nothing but a myth.

This Period has been primarily focused on the great political game between nations that has resulted in two wars.

The Northern War between Gotland and Caelint that dragged in every nation in the north.

The Southern War between Obia'Syela and Lux Nova that pulled in the Shattered Vales.

Nothoi and Angmar came in on the side of Caelint and the war continued for some time with great devastation spreading throughout Gotland, Caelint, and Angmar. Nothoi also felt the bite of the war in the northern regions.

Thalmarkin eventually declared war on Grehkia which had remained neutral until that time, thus bringing in a new stage of the Northern War.

I really don't know how this war started. It appears to have started between Lux Nova and Obia'Syela, with the Shattered Vales coming in on Lux Nova's side. Battle reports and map viewing suggest that Obia'Syela has been taking some loses along the common border.