The Sea of Four Cities is located in southern Beluaterra. The area was named for the four cities that surrounded the Sea: Fwuvoghor on the north, Enweilieos on the west, Grehk on the south and Rines on the east. 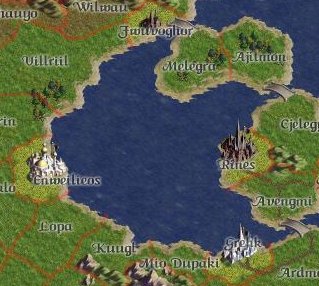 The Land surrounding the Sea has always been the site of wars and turbulation, and a perfect place for warriors to do deeds worthy of telling a tale.

During the Daimonic Invasions the cities were very damaged and partially destroyed; especially the Northern Islands which saw the cities of Rines and Athol Margos burnt to the ground. After the Fifth Invasion the area has changed dramatically. Enweilieos, Fwuvoghor and their surrounding regions were lost to the blight whilst Rines and Athol Margos survived and were rebuilt yet again.