The First Age of Beluaterra 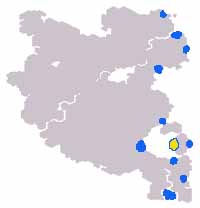 Soon after Beluaterra was discovered, many nobles took ship to explore the new lands. Arriving, they saw that only a few cities along the east coast were advanced enough to have risen above barbarism, all other lands were still rogue. Those original cities were (from north to south): Lin Helon, Agyr, Mhed, Fronepu, Fwuvoghor, Enweilios, Rines, Athol Margos, Grehk, Irombro and Eno.

After initial peacefull expansion the first conflicts arose, especially in the south were 6 cities lying next to each other vied for dominance. There the first war on Beluaterra should be sparked: Rines Republic against the Athol Collective.

Grehk (then controlling Ardmore, Glongin, Bym and Mio Dupaki) had been under pressure from Eno Chia (then already controlling the city of Jidington) for quite a while. In addition they saw that between Enweil, Eno Chia and Irombro there was no place for them to grow fast enough to survive. Therefore they decided to gather enough men and money and head northwest to establish their realm once more in the wilderness. Before they departed into the unknown, they offered Irombro their old lands - mostly to defy the heavyhanded politics of Eno Chia. Then they left and were not heard from again for a long while before founding their realm Grehk anew around the city of Keffa.

While Grehk prepared for their great treck, Enweil and Voghor both expanded ever faster towards the northeast, Eno Chia worked their way towards Grehk to ensure that Irombro and Rines would be shut off from expansion. Due to this, negotiations between the Rines Republic and Irombro started, aiming to merge these realms into Riombara and establish a new capital in the city of Grehk. Grehk's regions were taken over with the consent of Grehk's nobles.

Seeing this Eno Chia (then consisting of Eno, Jidington and Eylmon) declared war against Riombara - as they did covet Grehk and planned to unite the whole southlands under their rule. Enweil joined on Eno's side, though they vowed to wage war only in former Grehkian regions - a vow they did keep.

The treck of Panther II

Seeing the bloodbath that the south had become, Panther II and several other Riombaran nobles did decide to head east to found a new realm untouched hatred. They were supplied and did strik out into the unknown to found the realm of Marca de Pantera centered around the desert stronghold of Tahgalez.

The Founding of Luz de Bia

After long and fruitless fighting during which Riombara more or less withstood its two larger enemies, Enweil withdrew from the fight around August 1003 to found a colony of their own in the east - though it is not know wether this endeavour was successful or not. At the same time, Doc's Biatch, the main drive of the fight against Riombara seceeded his city Jidington to form Luz de Bia to continue the fight...from this point on fighting did become increasingly bitter.

While Luz did slowly advance against Riombara, Eno Chia did not manage any gains. From the north Fwuvoghor suddenly attacked Riombara and initially gained several regions. Then, after increasing internal dissent Riombaras leader, Balin did have his banker assassinated, disbanded most of Grehk's militia, set taxes disturbingly high and defected to Luz de Bia. This drove Irombro, Athol and Rines into revolt, leaving Riombara with only 3 regions. Luckily news about the discovery of a new continent did reach Beluaterra. One of the nobles that did leave the continent was Doc's Biatch...which in turn enabled peace between the archenemies. Peace was short as immediately afterwards the undead should rise.

While the South devoured itself, tensions in the north did spark as well: Melhed did oust Ar Agyr from its founding city - driving them north of the river. Later did Melhed did attack Fronen but was driven to the brink of extinction - though a peace between these realms was forged that should hold for a long time.

Then Grehk after having expanded from Keffa to Ossmat, Gethsemene and Vozzessdor did attack Agyr. Lin Helenon did support both Agyr and Grehk at various times while Melhed did ally with its former enemy Agyr which at that time only controlled Unger and Vatrona. This war should rage back and forth for quite some time. However, due to internal discontent, the original colonists of Grehk would seceed Gethsemene from Grehk to found Old Grehk. The ensuing civil war did end the Grehk-Agyr one. Fronen and Marca de Pantera would support Grehk, Ashborn first supported Grehk, later Old Grehk - but even though Gethsemene was stormed several times, the small realm endured. Fighting did continue until the coming of the first undead waves of the First Invasion.

During the Grehkian civil war, Melhed and Lin Helenon were at odds as well - Lin Helenon had not gained sympathy for their repeated changing of sides. Together with Agyr, Melhed made war on Lin Helenon, nearly destroying the realm. The First invasion should finish what Melhed had started.

Little is known about its founding in Firbalt - rumors have it that nobles from Helenon were among the first colonists. Ashborn did support Old Grehk during its civil war with Grehk.

The origins of Mesh are also lost in time - though Mesh is one of the very few realms enduring from the First Age into the current fourth. Even its founding city is disputed - though most claim it to be Twillen. No histories of what Mesh did during the First Age survived though it is known that it did act as mercenary realm.

Undead activity increased tremendously during this period. Most realms suffered very severely from endless Undead attacks. The date the first undead appeared was not well recorded due to massive loss of historical documents during the age. From available records, historians are sure that undead has already invaded the edges of the island (2004 December). For three months the Undead population were greatly suppressed by human forces. The Necromancers were banished.

The Horde from the Coast

(2004 December to 2005 January) The Undead were sighted and sages warned all human realms should prepare for the worst. Undead appeared on Northern Beluaterra, invaded Lin Helon and Melhed. In Southern Beluaterra they invaded western Enweil. In Eastern Beluaterra they invaded Riombara, Eno Chia and eastern part of Voghor. Most of these infested parts are along coasts. Many sages suspected Undead were landed on the coasts. Some even claim the Undead are not naturally created, but artificially from Necromancers.

The Darkest Age Ever

(2005 January to 2005 February) The Undead attacks were increasingly intense and started to invade the very center of the continent. In this period human realms suffered the most casualties.