The Fifth Age of Beluaterra

The period since the end of the Fourth Invasion unto the present.

The End of Darkness and the Beginning of a new Age

Around January 1011 the presence of the Archons had driven the three hostile factions of Monsters, Daimons and Undead into decline. These three factions had made Beluaterra their battleground for dominance during the Fourth Invasion and had come nearer to destroy all mankind than any darkness had been able to before. At the end of the invasion large parts of Beluaterra had become inhospitable and covered in darkness, giving the continent a new face: 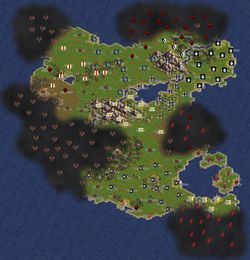 Politically the situation was quite fluid during the beginning of the age...no strong enmities between human realms remained with the exception of the Meridian Republic being considered hostile by all direct neighbours. The strongest political block at the end of the invasion was formed by Fronen, Enweil and Bara'Khur. These realms were mostly federated with army strengths of 32.000, 12.000 and 10.000 respectively. The second block was formed by the northern realms...being joined in different military alliances though only loose political ties. From west to east: Sint (14.000), Old Grehk (10.000), Thalmarkin (3.000) and Melhed (20.000). This Northern block could be considered largely friendly with one or more members of the central alliance. Lastly in the south lay Riombara (18.000) and the Meridian Republic (3.000). Both these realms could only reach the rest of the continent via Enweil due to the nature of the darkness with Enweil and Riombara having a 'carefully friendly' relations while the Meridian Republic was at war with both others.

The main effort after the end of the invasion was spent towards retaking rogue regions and defending against large hordes of undead. These hordes were not bound to a single will as during the invasion but had started appearing all over the continent in large numbers.

During February of the year 1011 the realm Bara'Khur was riven asunder. Apparently strong political divisions had been present within Bara'Khur even during the invasion, nearly creating open rebellion on several occasions due largely to the death of its last "popular" Monarch, in the midst of reforms. With no stabilizing force or factor, despite the huge Monster hordes ravaging the lands, human nature once again ran its course: amid heated discussions which resulted in duels, and had, in the past resulted in the mass demanding of death duels between several nobles, including the King, the prosperous duchy of Wudenkin left Bara'Khur for its confederated ally Fronen. This large city took four regions with it, of which two did return to Bara'Khur. Shortly thereafter the duchy of Reeds seceded to form the new realm Nothoi, taking seven regions with it and claiming to be the true and rightful successor of Bara'Khur. This left Bara'Khur with only the city of Dyomoque and the far of region of Naraka which soon went rogue. Despite seeming very close to destruction Bara'Khur did manage to survive.

Melhed, having survived nearly intact and with no regions bordering darklands did not expand further. They mainly expended effort to aid Thalmarkin after overcoming some instability after Dilgaard Gamlem, their Consul during the invasion was removed for inactivity. Old Grehk managed to expand considerably during the end of invasion and roughly doubled in terms of nobles and regions. A dispute about the rights of religions vs lords and the powers of the Lord Chancellor (judge) ended up with Victus Draco, Lord Chancellor and Duke of Ossmat being banished. Once reaching the limits of possible expansion, graced by having only short borders with the darklands Old Grehk has been aiding Sint and Thalmarkin against the rogues. Sint did suffer from a lack of nobles initially, thus their expansion was slowpaced though they took control of all regions bordering the darklands during February 1011. The largest group of undead sighted since the end of the invasion, numbering some 10.000 was sighted in Tor and destroyed by Sintian forces with some aid from Old Grehk. Thalmarkin, due to their position as bulwark against the northern darklands was the hardest hit. Their knights retook Wailing Wood and Lastfell with help from Melhed, but have had difficulties repulsing the constant rogue raids.

During that time Riombara did continue to advance against the Meridian Republic: After the duchies of Rines and Athol had both rejoined Riombara during the end of the invasion, Riombaras army took Ajitmon and Melegra, reducing the Meridian Republic to its capital of Fwuvoghor. At this time the government of the Meridian Republic did surrender, agreeing to exile - shortly thereafter the city was taken by Riombara. From that point onwards this realm faced occasional but heavy fighting along its southern border which was open towards the southern darklands. Enweil was hardpressed by rogue incursions but managed to hold their own, supported somewhat by Fronen and Riombara who mounted a few expeditions to aid Enweil though these managed to reach Enweils capital Fengen only once due to heavy fighting on the way.

War of the Survivors

Main Article: War of the Survivors

Having absorbed much of Bara'Khur, Fronen emerged as easily the most powerful realm in Beluaterra. Their rise left many nursing grudges though. Nothoi was the first to renounce peace with Fronen, but Old Grehk, Sint and Thalmarkin struck the first blow a day later. Outnumbered nearly three to one, Fronen's armies were defeated in Yipinalke and Vore. Doge Diana Calista Torres de los Reyes disappeared and rumours circulate that she threw herself into the lake on whose shores Vur Hagin was built.

Shortly thereafter Guillaume Cheniér did seceed the city of Iato from Enweil, forming the cossack realm of IVF. This new realm soon did ally itself with Enweil. At the same time Riombara did declare war against Enweil with the intention to prevent Enweil from assisting Fronen. IVF did - mostly - support its ally. IVF and Enweil did outnumber Riombara economically - but especially in food production. Thus all beluaterran realms were once again at war.

The southern war did rage for a time, with Riombara slowly advancing after breaking the deadlock around Kuugl. Fighting did center on Lopa, with Enweilios being stormed but not held by Riombara.

In the north political machinations did sunder the alliance of the attackers: after some effort Melhed was convinced to enter the war against Fronen, only to be . in their view - betrayed by Old Grehk trying to come to a - very harsh - seperate peace with Fronen which would have left Melhed no gains. Receiving news of this, Melhed did withdraw from the war, shattering the peace talks as Fronen could not consent to be completely emasculated.

Amid all these pleasantries, rumors burst of daimonic priests being sighted. Rumors become certainity - and soon after were followed by daimonic troops under the command of Overlord. With this the fifth wave of unhuman forces did wage war on Beluaterra - near bringing humanity to extinction once again.