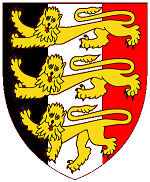 The Barghouti family hails from Anost, a fairly large townsland region in the south of Eston, on the Atamara continent. Their ancestral history is shrouded in mystery. They share all the physical traits of the warrior nobles of Ibladesh, and they worship the same deities as the Ibladeshian Church does. The first written record of the Barghoutis dates from almost two centuries ago. Historians have discovered a book in which one tale tells of a young nobleman named Etci Hajaj, or 'Hajaj the Butcher', a wandering warrior, who roamed the entire world in search of combat. Whenever he found a realm at war, he would offer his sword to the ruler, and fought under him for as long as necessary. Should there be peace, Hajaj would simply move on to the next continent.

At the age of 32, Hajaj was murdered in his sleep by a rogue assassin. He left an infant son, who carried on his father's name, along with the surname of his mother, one of Etci Hajaj's mistresses. Hajaj Barghouti was raised as a warrior like his father, but his mother insisted that he was taught the arts of literacy as well. From the age of 7, Hajaj trained his fighting skills during daytime, and in the evenings, teachers from all around the world would educate him. From there on, all Barghouti men would receive similar training, so that they would excel both in the physical and mental arts.

The Barghouti's would continue offering their swords to whomever they deemed fit, until a young Barghouti named Redouane grew weary of combat, and settled down in Anford, a small town in the Estonite province of Anost. He lived a peaceful life, until the northern realm of Norland cowardly attacked Eston when the Estonites were waging war far away. Redouane did not hesiate one instant, and promptly called for the best instructors money could buy to educate his five sons, the twin brothers Marouane and Hassan, and Malik, Najib and Tariq. While Marouane stayed home, Tariq, Hassan and Najib were sent to other continents to train under local instructors. Hassan travelled to the South-East Island, Tariq was sent to the East Continent, and Najib went to train in the newly discovered Colonies. Later on, Kyra, the only girl between four brothers, joined the armies of Eston as well. After her death only a year later, her cousin Malik reluctantly took her place. After Hassan died, his first sargeant Karim swore to avenge him. Although not a blood relative, Karim was welcomed into the Barghouti clan.

After Marouane was appointed as Duke of Massillion, King Andrew McKay gracefully offered the family one of his old mansions, and the family moved to the Emerald City to live close to their eldest and most prestigious son.

The Barghouti family currently has 12 fame points, broken down as follows:

The Martyr of Korlok

The Servant of Sartan