The Atamara Dueling Association was a non-political sporting guild devoted to the art and practice of swordfighting. Unfortunately, the sport of dueling became increasingly violent, resulting in increasingly more injuries and even deaths. As a consequence, dueling for sport has become extremely rare, and so the Atamara Dueling Association has been forced to close its doors. The history of the guild is being maintained in the Dueling Museum of Mapaxal, sponsored by the Dolohov Family.

the ADA's banner for all its guildhouses 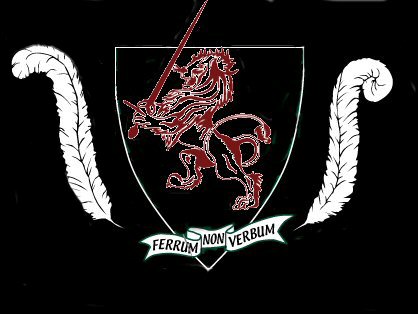 created by: The Specialist Del Toro

The Motto: FERRUM NON VERBUM, loosely Translated means Sword not Word. the foundation of the guild, gives this organization a strong image to the world that we strickly believe in the practice and skill of the sword,before any politics or nay sayers.

Tournaments have long been a source of entertainment on Atamara, particularly the swordfights -- mano a mano fights, over and over, to see who the finest swordsman at the tournament is. Tournaments, however, are few and far between, and your dedicated swordsman gets restless.

Not long ago, a dueling craze swept the island. Initially, people fought to settle grudges and slights, furtively in rural regions. Eventually, bored nobles began to duel sheerly for the honor of besting an opponent in single combat, and underground dueling clubs began to form all across Atamara, in basements, taverns, and mausoleums.

The ADA was formed when Kepler Dolohov and some fellow Talerium nobles (Thorbjørn Tyreslagter, The Specialist Del Toro, and Autarii Flockhart) pooled their money to renovate the old Dolohov family stables into a diguised training center. Their goal -- to link up the underground dueling clubs all over the island, and rank those duelists to see who really is the best.

All nobles need to obey the laws of the realm they find themselves in, in order to maintain the Guild's good standing.

Each member must own and keep in good repair:

These items are included in the joining fee.

all member duel records are found in the membership link

Membership is no longer by invitation only. However, dueling is still illegal in some realms of Atamara, and so it is necessary to maintain a certain level of secrecy to protect members who belong to these unenlightened realms. It is still good form to formally invite new members, though, for the sake of decorum. For example,

"I, Kepler Dolohov, declare that Thorbjørn Tyreslagter is a nobleman, an able swordfighter, and is trustworthy, and I sponsor his membership in this guild."

Do not reveal to a non-member any information about association membership or rankings.

Members are expected to regularly duel to first blood to keep up their skills and maintain their ranking. All duels must be reported to the overseers so that ranks can be adjusted. A duel does not count toward official guild ranking if one of the duelists is wounded or killed. (If both participant survive, the duel may be refought for ranking)

Dueling Outside the Association

Members are permitted to duel honorable noblemen outside the guild, both to settle matters of honor, and to sound them out for potential membership. These duels do not count toward ranking, even if the opponent later joins the guild.

Members are not permitted to duel noblemen who are expelled from the guild. If such a "noble" insults the honor of a member, it is better to have him killed than to give him the satisfaction of a fair fight.

Unauthorized duels to the death are explicitly prohibited, and will cause the victor to be expelled from the guild, and the loser's record to be deleted from the guild ranking.

Crimes Against the Guild

We recognise that realms have an interest in protecting their troop leaders from harm and maintaining order. However, the rules of the ADA are sufficient to prevent such harm to a more than reasonable extent. Therefore, any actions against the association by a realm must be considered a crime against the association. This includes:

All members are called upon to prevent and punish these crimes, in any way they see fit.

here you'll find the rankings page for all members of the guild and where they stand, points champion and duelist champion and rankings for both divisions top 30 members, upcoming guild tournament information, and any ADA sanctioned scheduled duels.