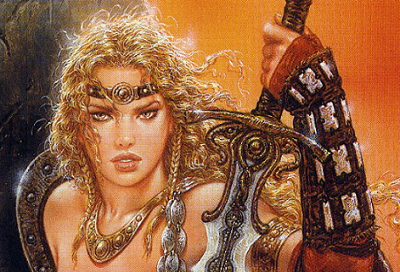 As one of two legitimate daughters, Katerina was raised into the world with great care from her benevolent mother. She grew fond of tales her mother would recite before dusk, and refused to fall asleep until their timely conclusion. Many included Queen Alanna Anaris, and when Katerina was only a child, she would re-enact battles with her brother Caspius; always assuming the role of the Queen. When Pian en Luries entered a state of crisis, the nobles overthrew the Queen for her inane ability to control the realm, branding her a tyrant. Katerina's parents quickly instructed her of the brutalities and sufferings the Queen had caused, only infuriating Katerina into a rebellious state. It was only by her teenage years that the young girl grew beyond her childish fantasies. Soon, she spent her timed buried in scrolls, fueling her obsession in both history and legend. Caspius encouraged Katerina to pursue her scholarly ambitions and quickly formed an inseparable bond between them. Unfortunately, such things aren't made to last, and he left for the Far East. Katerina was utterly devastated. These seemingly minor events culminated to created a deep sense of abandonment within Katerina, and upon adulthood, she chose to stay in Pian en Luries; remaining loyal to the lands in which she was raised.

Fresh as a noble, Katerina quickly became popular amongst the nobles of Pian en Luries, having a keen sense of respect and etiquette, and a fond intrigue for history and lore. Earning herself an estate in Askileon Purlieus, she presented her request to become Royal Archivist to Warden Malus, and the succeeding King Koli, who were more than willing to entrust a position to the young dame. In a turn of events, Queen Alanna, who had assumed to be dead, returned to the realm during elections, and imposed her claim on the nobles. Katerina was conflicted, as her admiration would have her side with the Queen, and her loyalty to the claimant. Ultimately, her loyalty prevailed, and when the rebellion was called against the incumbent King, she took up arms in the name of the King. She was one of four nobles to defend the Capitol in the initial surprise attack. In the second, and final battle, Katerina wounded the Queen, souring her chances of success.

After the quelling of the rebellion, a new direction was taken in Pian en Luries. Many territories had long since been lost under the Queen's rule, and it was decided to reacquire these lands. The expansion required two armies, The Crusaders of the Path, and the Aegis of Luria. Katerina, for her brave and honorable efforts, was chosen vice-marshal of the Aegis of Luria, whose sole purpose was to defend and protect the sovereign lands of Luria. She participated in the takeover of Garuck Udor and Lupa Lapu, and was essential in the costly defense of Ciarin Tut. Juan De Legro, previously Marquis of Askileon Purlieus, then won the magistrate elections, declaring Katerina his claimant; as is Lurian law to hold no lordship as a council member. After vigorous debates between Duchess, Count, and knight alike, it was decided Katerina would be granted the rural region of Nid Tek, while Marshal Ramiel be awarded the lordship of Askileon Purlieus; appeasing his extensive expenses. Her Archivist work would also continue, with the republishing of all documents regarding The Manifest Path, and the expanded histories of Pian en Luries.

As Dantooine joined the fold of regions under the Pianese banner, the Aegis sought to conjure an improved defense. Unfortunately, despite proactive efforts, winter hordes inflicted many civilian casualties in Dantooine. By winter's end, Duke Malus sought to create a ducal army, the Hammer of Dawn, tasked specifically to prevent such events from occurring again. The aegis, by consequence, was replaced. However, Katerina inherited her previous vice-marshal position in the new army and continued to direct orders on the northern front. It was by the beginning of summer that her efforts would be rewarded, acquiring the Marshal position.

With continuing dedication to the realm, Katerina was the shining example of a loyal and intuitive noble. A few months later, on the prerogative of several nobles, She ran for the position of Magistrate against her former liege lord Juan De-Legro, acquiring a narrow lead in the concluding polls to earn the position. Under her directive, many laws were reformed and created, establishing a more stable and functional realm for all nobles to operate within.

The fifteen day Queen, Katerina, was voted in by a simple majority in times of crisis and pain. King Koli, the previous ruler of Pian en Luries and Katerina's husband to be, was poisoned and rendered incapable, while Solaria and Luria Nova waged war on the crippled nation for their own selfish desires. Once allies became enemies, and no one could be trusted both inside and outside the realm. As the conflict escalated, Katerina enlisted the aid of the Grand Duchy of Fissoa, an old ally that could render its aid in the name of justice. Yet, even with the additional aid, the war was being lost, and soon Katerina lost hope in both the recovery of her husband and the success of her realm. Upon discovering that Royal Overseer Brom Silverfire, her close friend, poisoned King Koli, nothing was left within her but sorrow and despair. She invited the Royal Overseer to the royal bedchambers, only to have him witness her own suicide over the balconies.

Now, she has faded in memory, the fifteen day Queen wrought by the destruction of her heart.