Leopold is a member of the House of Boreal the Great. As a firstborn child of Boreal's son Alexanderos, he is the eldest heir to the legacy of his famous grandfather. After Abraxas died, Abraxas who originated from the House of Mythos, Leopold assumed the duty and honor to be the new Patron of Arrakis family, thusly bringing the leading position in the family back to the House of Boreal. Leopold is of medium height and his torso is usually covered by decorative, yet thick protective armor. His face is graced by two grayish eyes who give impression of wisdom in his gaze. He wears a blood-red long cape and fights with a sword and shield. His sword, Darfus, was passed on to him by his father, and the sword was supposedly forged in Darfix when the first conquerors arrived. The claims listed are supported by the Arrakis family and Leopold is in their eyes a rightful claimant: the city of Darfix, city of Chrysantalys. 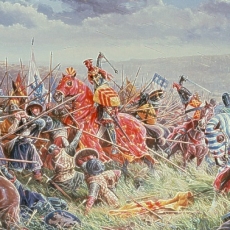 Leopold was raised in the Holy City of Mimer, the capital of Corsanctum. Since his father Alexanderos was always a rover and had little time or patience to raise a young noble, he gave Leopold away to the monks of the small monastery in Mimer. The holy place should have provided shelter and guidance to Leopold. And indeed, the monks thought him much about the Bloodstars, yet the young noble always resisted to give himself completely to the Faith. This inner revolt was mostly due to the fact that many in the family believed that the power of the Bloodstars was the reason that Boreal the Great went mad and disappeared in the western seas. As days went on Leopold had grown enough to start serving Corsanctum, which he did, and was shortly named as the Count of Eisenik. Still, his own aversion towards his grandfathers faith was too great within him and as days became too long Leopold started to feel restlessness. As such, many of the family elders blamed the Faith for Boreal's death. Eventually, as his own spirituality was waning he decided to leave Corsanctum and the Bloodstars in order to explore the world in pursuit of his own destiny. But without a divine guidance, Leopold found out the world to be a cruel place. First he served in the Lurian Civil War as a noble of Giask fighting against the tyranny. This did not bode well as the rebels of Giask were utterly defeated and destroyed. Leopold barely escaped and took the last boat that would lead him to East Island, where he planned to seek shelter in the halls of Abraxas, his uncle, before he decided what to do next. In those distant lands Leopold served well, leading a mighty host of cavalry as a noble of Diocese of Aix. However, it was not meant to be as the enemies of Aix outmatched his uncle's cohorts, and as history was repeating itself Leopold was forced to flee once again. This time the ships took him to Atamara, where his service to Eston was short-lived and uneventful.

Lost in the emptiness of his own life and disconnected from his own spirituality, Leopold eventually decided that the time for a change had arrived. He sought to pursue his own destiny in the same place like his famous ancestor did; on the green fields of north-western Dwilight where his legacy rested and patiently waited for him. As the Kingdom of Iashalur was formed Leopold returned to Dwilight and made amends with his past. He re-accepted the belief in the Bloodstars and started to serve as a noble of Iashalur, although he is nowhere as zealous as his grandfather was. He was greatly welcomed there by many elderly nobles who served with his grandfather and this only strengthened his resolve to relive the glory of Boreal the Great.