The warrior, the leader, the culturist, the historian and the ultimate hero of the Arrakis family and the founder of the House of Boreal, Sir Boreal is undoubtely the most prominent and remembered heir of Monachus. His characteristics reflect his ancestors skills more than any other living member of the Arrakis Family. Just and fair to his friends, but deadly and cruel to his enemies. His behaviour follows the sharp line of his sword. Every true warrior knows that the sword reveals the truth and eases the burden of the soul; if the sword is directed properly. He lives and learns by those rules. He is a kind of men who will tell you the truth right in the face no matter how cruel the truth may be. However, a dose of cunningness and manipulation can be found in him as well. The truth is that no one can predict how Sir Boreal may react in any given situations...and many have tried. However, he somehow manages to find the balance in all things and is a respected peer among the noble world. He is also a workaholic always researching and studying something when he is not on the battlefield. He tends to value the soul more than the flesh, and he is devout believer in the 3 Bloodstars of Sanguis Astroism. It can be said that Sir Boreal is loved by the people he rules which is a charactertistic of a true leader. 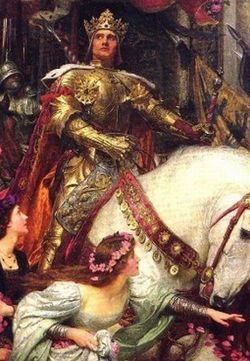 King Boreal on his victorius entrance to Darfix.

Sir Boreal is of normal height, dark brown eyes and long brown hair. He excells at warfare and combat. In his youth he passed many war academies in Calis, his birth place, which were a lessons that carved forever in his mind and that shaped him as a person. As years went by he used his knowledge on the battlefield and brought his senses and skills to perfection. He prefers leading infantry into battle, but is skilled enough with both cavalry and archers. He fights with a longsword that is accompanied by a large shield as well. His longsword he received from his father Svarog, and the sword supposedly was a legacy of Monachus himself. The sword is made of pure silver and a large blue diamond placed in the stalk, often reflecting the sun which gives the illusion that Boreal's sword is glowing in battle. By the family legend, the diamond represents the everlasting souls of his ancestors. Boreal's close combat technique is a bit of avanguard and improved compared to that of his peers. He calls it the "Flight of the Eagle". It combines both brute force and the sofisticated attacks. When not on the ground in the heat of the battle, he usually charges into the enemy ranks on his war horse Imperator, given to him by his friend from Morek, Hakkon Klingenberger. The horse is of the pure line, wild and powerful, and has lead Boreal to many victories.

He has spent a substantial part of his life as the military leader in Astrum and the beacon of the Astrumese ideology of honour. As the Stratgeos and Marshal in Astrum he had made strong impact on the young nobles there who later became exemplary war masters, and has restructured Astrumese military with high mobility and defensability. In such an important role he has helped whitstood many tests from abroad, such as the strong Morekian puppetery politic at that time, and he had his Destiny at hand.

With the age of 22, Sir Boreal married to Lady Fiona from the minor noble family that originates from Libidizedd. When he was proclaimed as the Duke of Chrysantalys, he and his family moved into the grand Ducal Palace of Chrysantalys where they enjoyed Boreals Dukeship and a life in the refreshing mountain area. He has one son, named Dagobert. In its infancy the child has been blessed by the priests in Chrysantalys with a strong spirit, and have foretold him as the grand heir of his fathers fortune.

Continental accomplishments:
Sir Boreal Arrakis together with Duke Brance Indirik of Libidizedd invented the first and most unique Calendar for Dwilight. After both of them have spent considerable amount of time in the highest towers of Libidizedd looking at the Stars through the giant spyglass, they have noticed the circural repeat of the same seasons in the same time. They have then merged those seasons in a cycle called "Year", and from those basics the people of Dwilight have started measuring time. The Calendar was adopted by almost every realm in Dwilight.

He is also the first man ever who conquered Darfix, the last frontier of Dwilight and the city that repelled large masses of colonists over the years. With his army, the Paladins of the Silver Temple, he embarked on a two weeks long expedition in the middle of the winter to reach and take Darfix, which he managed to do. They founded the realm of Niselur based in Darfix, and Boreal was elected as the First King. Soon after that he appointed himself as the Duke of Darfix in order to reward himself for months of preparations and large financial support he aquired and contributed for the expedition (almost 4,000 gold pieces), and to guide the newly born realm in direction of prosperity under the guidance of the Bloodstars.

He died of illness with the age of 30. After his death his character was described by some of the greatest nobles of that era, and the writtings were stored in the Great Library of Darfix.