.........Arcaea is a realm with a long history of war and strife, and its people are known for their unbreakable will. Once the Arcaean Empire stretched across the entire northern half of Far East Island, before disunity lead to its break up. Since, then Arcaea has repeatedly been brought down, only to rise phoenix-like once more.

.........With a political landscape completely changed in a few scarce years, Arcaea stands as the most dominant and reinvigorated power in the Far East due to a mix of charisma and military effectiveness. Following the consolidation of our borders with a host of previously hostile neighbours and a grand crusade to defeat Soliferum in the south, we have entered a period of uneasy peace as new realms have risen in the place of old ones, whilst the incumbent powers, as always, push against the fickle nature of Lady Fortune. In all this Arcaea has continued on her ascendency through thick and thin.

.........So what does this mean for you? Merit and capability are more important than seniority, so if you have the talent and are willing to work hard, Arcaea is the realm for you. We never lack for strife or things to do, so make a mark, be vocal and ask about what is happening! There are a lot of great nobles so don't be afraid to push through them and make yourself heard.

.........In Arcaea, all roads lead to Remton... and to the steps of the Royal Palace. Not only is it the centre of government, it is also the best place to learn about the realm itself. Though, the rest of the castle is restricted from unauthorized visitors, foreign dignitaries and other guests are free to roam the numerous rooms of the ground floor. But why are you here? What do you wish to know about Arcaea? Perhaps you'll find your answers in one of the rooms of the castle. 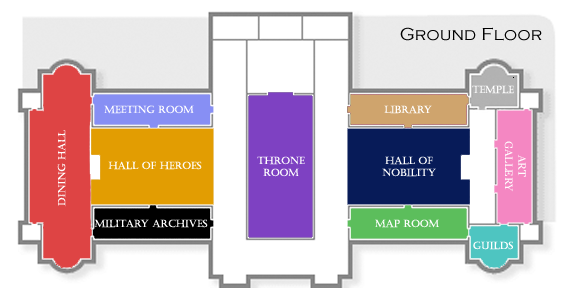