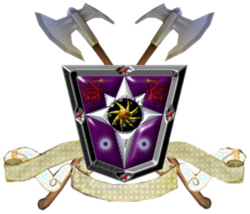 The Alaran coat of arms.

Alara was founded after the ice melt off the southern part of the East Continent, in the beginning the realm controlled the regions of Noritor, Priotness and the city of Itorunt that came to be known as "The Black City". The regions of Ejarr Puutl and Itor Boss where then conquered and annexed to the Kingdom.

The first Alaran King elected was Robb Starfall, under his reign the fortress in the Black City as well as its recruitment centers and much more infrastructure was developed. Soon disagreements between King Starfall and his Captain General Sayuki Kuriga lead to the former to disband the militia in the Black City and join Xavax taking Itor Boss with him. Negotiations failed and Xavax never returned the region. A few months later the great southern war started when Xavax declared war on Alara, Minas Nova and Perleone decided to support Alara.

After losing the great war with Perleone, Alara began a great transformation and transitioned into a realm named Sydgard.