The Church of Teros/Documents/The Teachings of Teros

The Teachings of Teros 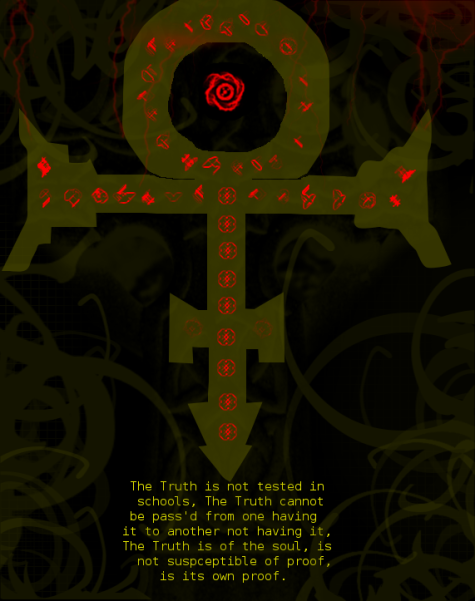 (The words of Teros as told by his disciples)

Chapter 1: Of Dark and Light

What is the Dark? Why is it that those on Clatharia associate the Dark with evil, when in truth the concepts of good and evil are but creations of man? Before one can become a follower of the Lord of Dark, one must understand what the Dark is.

Standing for against all that is the Dark and for everything the Dark is not, the Light and Dark are incapable of living in harmony. To be a true believer of Teros one must understand what the Light is, and why it pervades in Clatharia. Here you will come to understand what we call light, and precisely why Light and Dark can never exist in harmony.

The three planes, what they are, what they sometimes contain, and their relation to the followers of Teros.

Chapter 3: Of Living in Clatharia

To strive to be within the shadow of Teros is the goal of all his followers. We live within his protective shadow, so that when the day comes, we may march forth with the Army from his protection and bring the Light to its end.

Mad men, crazies, the insane, hallucinations, dreams. Prophets have been called many things, and documented here are the words of those who have found their way to the Phantasmo, and what they thought they saw, felt, and understood there.

The Army of Teros. The Army of Dark. The Army of the Dead. It is the banner of Teros under which The Marshal commands his army, and contained herein are some of the things the Army is responsible for. From war on the battlefield to war with the mind, the forms of the Army are nearly as vast as its power.

What is The Truth? It is more than is contained within these pages, but it is also these pages. To understand The Truth one inheritantly understands the words within this book. Here, Teros explains for the unenlightened some of The Truth, and for those who understand, what this means, and how to recognize his followers at a mere glance.