Difference between revisions of "Tempest Family/Sol" 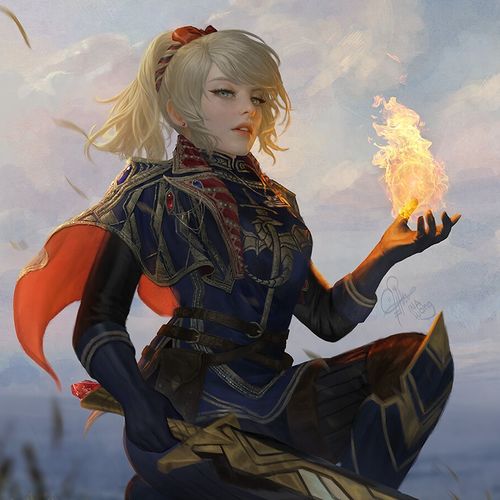 Sol, the Eldest child of the Tempest family hails from the province of Yipinalke. Born with the gift of fire magic Sol was raised with loving care and trained to harness the power of her namesake with complimented knight training. Upon coming of age to be a lady she was quite skilled with a single blade and possess' modest magic skills. On her 17th birthday Sol could be described as a slender women standing around 5ft7 with skin as pale as snow and blonde hair to match. Her eyes normally are a faint golden color however glimmer like topaz while spell casting. This is off putting to some common folk who often refer to her as the tempest witch.

Sol's current estate is The Tower of Misery within the Agony Heights district of Wudenkin.

Shortly after her 17th birthday while out dealing with some monsters nearby the family estate a group of villagers attacked the family home, killing her parents and burning the manor while chanting "kill the witch." Upon returning home she saw the carnage and learned what transpired. Sol with her longtime friend and mentor Captain Andred set to the nearby village and in a blaze of anger and fury burned it all to the ground. Sol had always had a good sense of justice until this point, but the actions of the ignorant villagers shifted her morals and view of the world in an instant.

With nothing remaining of her home she left Yipinalke with Andred and went forward to make a new path through life. By some chance or fate she met up with her former childhood friend Svari Storme, who she hadn't seen for years. Svari now a Warlord of the Sanguine Order under Lord Xlair Silverblade brought her into the fold, and Sol took his blood oath, swearing her magic and blade as his.

Upon the succession of Vordul Sanguinis from Thalmarkin her new Emperor Xlair Silverblade saw fit to grant her The Agony Heights district of Wudenkin as reward for her service.

The Tempest Knights are a unit of 30 stout infantry men. Captain Andred is the current unit commander under Lady Sol. It is said that Ricard and Rolland are the best fighters among the Tempest Knights.

Defence of Wudenkin from Undead

Attack on Undead in Verdomite

Defence of Verdomite from Undead