Difference between revisions of "Pride of Leandra" 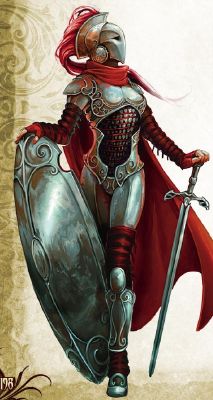 Leandra is one of the Gods of Men, catering to the aspects of war and battle. Residing in her castle in the Plane of Gods, she watches the warriors of the East Continent, granting boons to the finest warriors and especially, to the heroes who will eventually fill her halls.

A warrior goddess of unparalleled beauty, Leandra is beloved by both common folk and nobility. Said to possess brilliant silver hair, and clad in gleaming plate, she battles endlessly across the cosmos for honor, chivalry, and righteousness. 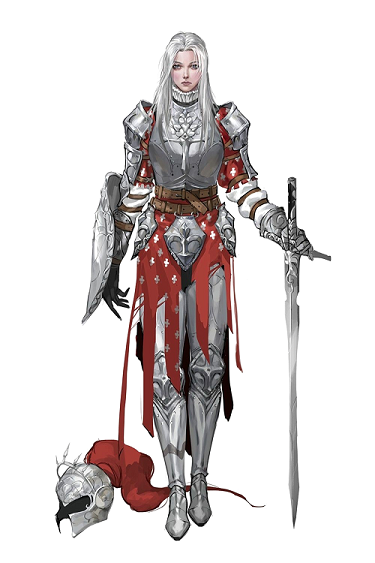 The Sword, Shield, and Helm of Leandra

The Goddess Leandra grants spiritual boons to those who serve her through her Sword, her Shield, and her Helm. 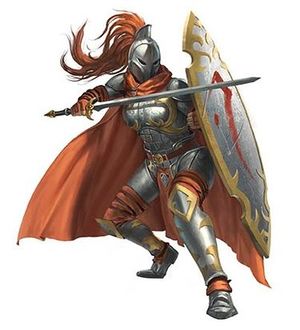 Knights of Leandra are expected to follow a certain code to chivalrous behavior.

1. To protect the weak and the defenseless, and seek out and vanquish evil wherever it is found

2. To refrain from the wanton giving of offense, and eschew unfairness, meanness, and deceit

3. To live by honor and glory, and at all times to speak the truth

4. To guard the honor of fellow members of the Faith

In the beginning, only the gods existed on the Celestial Plane. Desiring to create more of their universe, the gods created the World, spanning several continents. Upon this world, they gifted Life, and humanity was created. Humanity thrived and grew, settling around the continents, creating cities and towns, and eventually even entire realms. While the World grew, the Darkness watched. Evil Daimon gods had created, unbeknownst to the other gods, the Netherworld. This vile world was all the evil that the World lacked, where legions of undead and packs of monsters were created. Daimons were born of their unholy gods.

As humanity was reaching its pinnacle, the Daimons launched their attack against the World. Portal Stones had been placed throughout the continents, and through their assembly opened great and magical portals to the Netherworld. From these portals came the undead and monster scourges to plague the lands of humanity.

The gods, through their combined power, were able to protect the continents from the Daimons. They funneled down the Daimons portal magic to Beluaterra, which resulted in only one continent on which the Daimons could set foot.

It is now in the modern Age of Man that the battle between good and evil is fought, on the World by humanity, and between the Celestial Plane and the Netherworld by the gods of man and Daimon.

The Birth of a Religion

To be completed once the religion is officially created.

Sword of Leandra - The Elder Swordbrother/Sister

Shield of Leandra - The Elder Shieldbrother/Sister

Helm of Leandra - The Elder Helmbrother/Sister

Champion of Leandra - Any faithful who has won a Swordfighting tournament.

Knight Errant - Nobles who have shown to live their life by the Knight's Code. (TODO add criteria)

Hedge Knight - A knight who has sworn to follow the Goddess Leandra.

Champion Squire - An Adventurer who has slain an Alpha and returned with proof.