This article outlines the region of Madina. For the realm of Madina, see Madina (Realm).

The Harbour city of Madina lies on the southmost part of the Continent of Dwilight. Founded by merchants and sailors, it thus has a significant amount of markets and shops. Madina can openly be called “The Port of Dwilight”, its perfect location serves as a door way into the inner seas of the continent.

Madina also offers a nice, tropical climate. Though the inhabitants like it, foreigners do not enjoy the long and extremely hot summers, trade is usually at its highest throughout the autumn and winter times. You can imagine that the citizens of Madina live completely by the climate, they are not quite the active bunch and are hardly outside in the middle of the day.

Madina is characterized by its beautiful, almost dreamlike, coast line. The official story goes that once the first settlers arrived, they fell in love with the beautiful colours of the island and hoisted a flag in honour of its beauty. The deep blue see was covered with a red gloom by the setting sun, the golden beaches and the huge green palm trees made the picture complete. Together with the symbol of the ship and the sun, the banner of Madina was a fact.

Within the Duchy of Madina, a constant humid, clammy weather rules over the entire island. Summers are unbearably hot and long, and the winter is one big shower of rain. Typical Tropical out bursts of rain fall characterize this part of the year. It's impossible to travel during these bursts of rain let alone sail, but at times where the sun clears up, the weather is nice and moderate. The fall starts with a great harvest of the many fruits which the isle harbors and ends with a drier periode. The land starts to dry out the last 2 months of fall resulting to minor water shortage problems and combined with the sudden and extreme rainfall in the winter, destroys all possibilities to grow anything during this later fall and early winter periode. The most beautiful and comfortable time of the year is spring, many new plants and flowers spur up and farmers go tend there lands yet again, foreigners and tourist flock to Madina during this season.

Madina City, and by extension, the Duchy of Madina is governed by the Governor. Typically addressed as "His Grace" or "Her Grace" in the case of a female Governor. The Governor of any duchy is stable position in Madina and only few have held in threw the years.

Under the Constitution of the Republic of Madina, every duchy is free to design it's own laws and decide on what form of electoral system to use to bring out the vote of his duchy.

The duchy of Madina is currently working on new laws and it's electoral system, which is beeing discused by the duchies lords. 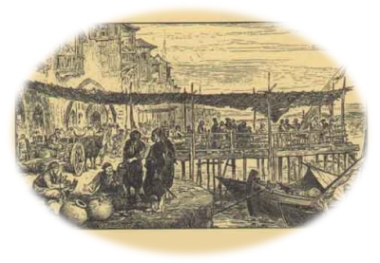 The Republican Herald is printed here, publishing various local news. It also goes in length about foreign issues, its read amongst nobles and the richer merchant society.

Inside the city halls we can find the Library of Madina, a great library with a great original collection of books and documents. A great source of local information. Visitors are encouraged to visit the library as it is a great opportunity to learn more of the past and even the present.