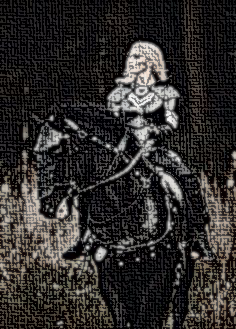 Following her death in battle on the fields of Moeth the Lady Scein is cursed to unlife, an undying scourge trapped amongst the living.

For some weeks Taselak had passed without a General, so now Lady Scein steps forward. Towards the end of the month she mounts an epic raid, marching the External Revenue Service through Ikalak and Sandalak whilst their respective armies besiege Taselak.

The combined forces of Ikalak and Sandalak are once more at Taselak's walls. After Queen Sorach falls leading the citizens' militia in driving Ikalak's forces from the city, Scein announces her candidacy for the vacant throne in hopes of a ceasefire with Ikalak. Instead Sennianus becomes First Axe n a platform of "no surrender, no compromise".

First Axe Sennianus falls in battle and the throne passes to Lord Torturer Aeneas. The citizen's militia continue to humble the combined armies of Ikalak and Sandalak.

Taselak is reborn after the fall and Scein awakes from her undying slumber.

February 1019 - The Rise of the Beppo Slayers

Following a fatal wound at the battle of Seggelin Lady Scein is once more thrust undying back into the land of mortals.

The collapse of Taselak and chaos amongst her nobles forces Hidden Hand Scein to raise the Black Banner and take command of the armies.

Newly appointed as Marshal of the Hammer of Taselak, Scein introduces a new doctine: always attacking; always in the front line; never giving or seeking quarter.

October 1019 - Once More Unto the Breach

November 1019 - Against the Priests of the Beppo

December 1019 - Against the Priests of the Beppo