A bookish child, Brigdha has grown into a woman of moderate height and slender build with the Dubhaine family's trademark sable hair and pallid good looks. The appearance of a sombre demeanour is accentuated by the saturnine cast of her wardrobe and it therefore often comes as a surprise to those who join her circle of intimates to find that she has an earthy sense of mischief and a quick smile that dispels the blackest moods, facts well known to the men and women under her command.

Brigdha is an excellent shot with the bow and as a battlefield commander she was cool, calm and willing to take calculated risks to get the job done. By turns she has been a soldier, a blockade runner, a ranger, a diplomat and a politician but in modern times she's best known as a priestess and diplomat.

Since taking the cowl her intimate knowledge of subterfuge and espionage acquired as second-in-command of the Fontan Bureau of Irregular Warfare and the judicious use of the web of agents she maintains throughout the north have fuelled many rumours, not least that she's a sorceress of considerable power. As an advanced adept of The Flow and The Shadows there may be some truth to these. 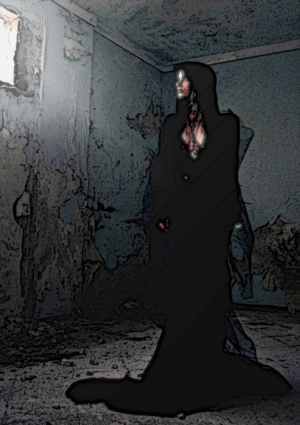 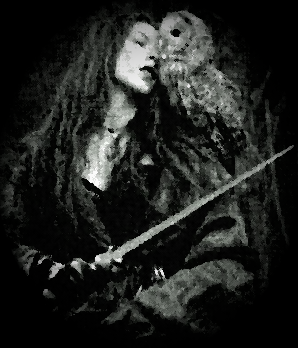 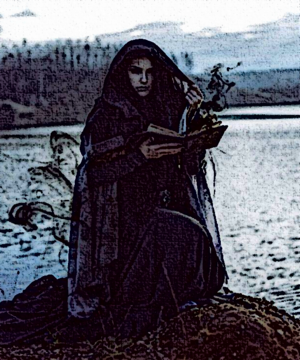 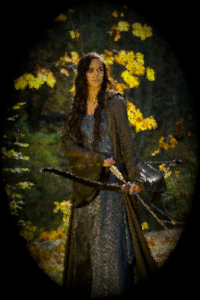 Brigdha Dubhaine started out as a serious young knight aspiring to a career of martial prowess, however on moving to Fontan she discovered a natural talent for trade and business which for many years came to dominate her life. Following the disappearance of her half-sister Moira she retired from public life, splitting her time between managing the family's many business interests and gathering any scrap of news as to the former Supreme Justice's fate and whereabouts.

As the Great War moved into its terminal phase with the capture of Negev by Sirion she felt compelled to once more defend the family's adoptive home, and during the black days when the Elven host hammered the gates of Krimml itself she found herself tasked with the city's defences. Later she rebuilt first Oporto and then Negev, following in the footsteps of her sister Moira, and establishing the region as a well-garrisoned strongpoint.

When it became clear that Fontan could no longer continue true to her democratic principles Marchioness Brigdha petitioned for formal entry of Negev to the Republic of Sirion and for many years held the region as its most southerly outpost, focusing mostly on establishing good trading links along the east coast and advancing the spiritual traditions of the Flow of the Balance as ranking Balance Walker.

Her service to Sirion included multiple terms as Lord Speaker and representative of the Heru Mellen on the Realm Council.

For a time she was cajoled into joining the ill-fated realm of Dunnera for whom she acted as Ambassador, and later became Ambassador and confidante to Shadow King Mayhem of Shadowdale when the Duchies of Southern Sirion were reestablished as clients.

Later when the Flow of the Balance was reformed as The Shadows she became an elder of the order with the honour rank of Balance Walker, endowing many temples and shrines throughout Shadowdale and beyond.

Jonas
Captain of Brigdha's guards
Lyra
The widow of a vintner reduced to indentured servitude for acts of treason in An Najaf
Bedhwyr
The son of Lady Moira's former Captain Carl Heinman and a close companion of Lady Brigdha
Naevan
Brigdha's son by Bedhwyr
Erfrayj
Naevan's elven wife, a minor princess of the Serpentis clan
Leopald
Grandson of Brigdha and former captain of Aednadh's bodyguard, The Ghost Watch
Kris
A chosen man, veteran of The Ghost Watch, now a personal guard
Hrolf
A chosen man, veteran of The Ghost Watch, now a personal guard
Seamus
Armsman to Hrolf
Anagridh
Sister of Erfrayj, travelling companion of Brigdha
The Ghost Watch
Formerly Aednadh's bodyguard and the preeminent special forces regiment in Sirion's history. Now a shadowy network of agents serving Brigdha
Iraen
Once Lady Moira's squire, Iraen is now chatelaine of the household holdings in Negev
Neris
The widow of Moira's personal physician Helion, Neris has an extensive knowledge of herb lore and is custodian of an extensive collection of medical treatises published in Fontan and the north
Yfain
A giant of a man with an oft-times murky past, Yfain is a reaver's reaver: happiest when the ale flows freely and there's mischief to be done. Following the disappearance of Lady Moira he became first Rhidhana's self-appointed bodyguard and then Aednadh's. Age somehow hasn't dimmed his lust for life nor appreciably weakened his physique, though his wild hair and beard are now entirely grey
Rollo "The Young"
A gregarious man of advancing years, he boasts a deep scar across his forehead from his youth as a freebooter. Rollo is supposedly the family's chief reeve, but more often than not he's to be found in company with Yfain
Hewel
Temple Guardian of the Flow in Oligarch

A record of the battles Brigdha Dubhaine has participated in.

1008
The Toxophilite -- The Black Swans are bloodied against an undead horde at Esgalons
Courtly Manners -- The sumptuous celebrations surrounding the official inauguration of Lord Tsubasa Kurosaki as Duke of Nida during the peaceful days prior to the war with Falasan
Perilous News -- Receiving the news of the death of her former tutor Carl Heinman, Brigdha has much to consider. Within a day she took ship for the East Continent to join her sister Moira in avenging his death.
The Helpful Secretary -- With Moira installed as Supreme Justice of Fontan, Brigdha managed much of her correspondence on her behalf. Soon after she launched her merchant venture
A Proposition -- Jorge Heinman, the son of Captain Carl Heinman, discusses a scheme to avenge his father's death

1011
A Foray into Politics -- During the family's absence from active politics Fontan's judiciary adopted a policy of executing enemy infiltrators. Seeing this as both ignoble and ultimately self-defeating Lady Brigdha decides to air her views on the matter in a public letter
Rumination in Prison

1012
The Grand Dame -- Lady Rhidhana has resigned her position as Minister of Defence and withdrawn from public life, refusing to see even her closest retainers. Marchioness Brigdha hurries to intervene
On Toxophily
The Saddest of Partings -- Brigdha delivers a eulogy following the death of her niece Rhidhana defending the gates of Krimml
Family Strife -- Brigdha struggles with the pressures of motherhood

1013
March -- Brigdha returns to arms after a long period as a senior priestess of the Flow of Balance, fired by the desire to avenge herself against Perdan and Westmoor for the murder of her niece Rhidhana

1015
The Wedding of Garas and Catherine -- The rebellious Duke Garas of Primus has seceded from the Sirion Republic and now marries Kronagos Catherine of Nivemus in an attempt to legitimise his control of Oligarch and environs. Brigdha attends the wedding where she finds herself caught in a game shadows and deceit when Prime Minister Ecthelion is poisoned during the festivities

1017
The Thin Red Line -- Shadow King Lindow contemplates switching allegiance to Perdan
The City That Would Not Die -- Against the backdrop of a brutal siege Brigdha takes her mission to Oligarch to meet with Glory, the daughter of Prime Minister Garas, and investigate claims of blood descent from her sister Moira. The blackest sorcery has been used by the besieging forces to injury Garas and his ministers
Those Whom The Gods Would Destroy -- As the armies of the South - led by Knight Commander Garas - close on the Caligan capital of Fontan, Ambassador Brigdha returns his daughter Glory from safe exile in Karbala

1018
Revolution Is Not An Option -- Ambassador Brigdha works in the shadows to oppose the revolutionary ideals of Vix Tiramora and Highmarch Pt 1, Pt 2
The Seed of Moira -- Pt 1, Pt 2
October

1019
January, March, April, May, July
August -- A diplomatic mission to the Court of the Phoenix in Eponllyn
September -- Brigdha comes into possession of the Vampire King's Anthology of the League of Anacan
October, November
The Road to Ibladesh -- Brigdha steps down from government office and straps on a sword so she can attend a tournament in Ibladesh

2020
January, February, March, April
The Shadow of The Serpent -- Whilst the King hosts a tournament for the knights of Shadowdale, Brigdha dines with Ambassador Smiddich Fontaine of Perdan
The Pirate King -- Smiddich Fontaine becomes king of Perdan following the tragic death of King Kay
The Liberation of Fontan -- Shadowdale claims Karbala's twin city Fontan following aggression from Caligus.
August