Church of the Trinity 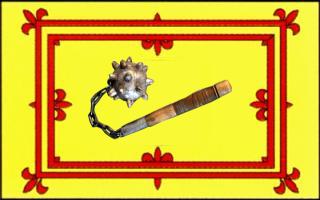 The people of Alowca are devout followers in the Trinity, a religion devoted to the two gods and one goddess of the world. The Nobles of Alowca do their utmost to defend the Trinity and ensure that it is left uncorrupted by the hostile and evil forces of the world.

The Gods of the Trinity

Khagistar - The name, in ancient Alowcan, means "the creator". Khagistar created this world out of the remnants of a previous one, of which little is known. It is supposed that the previous world was destroyed because the people there somehow failed the will of the gods.

Alluran - In ancient Alowcan, this god's name means "the beginning". Alluran is the god who sits in judgement of those who pass away. This reference to a beginning, as opposed to an end, is of utmost importance to the Alowcans. A favorable judgement from Alluran results in the spirit being allowed to pass on to the next world (spiritually speaking), whereas an unfavourable one condemns the person to return to this world in the form of the Undead.

Alowcan Government Compared to the Trinity

Alowca's Theocratic Government mirrors these three gods in their positions. The Pontifex looks to Khagistar, taking a hands off approach to most every day things while remaining involved in the big picture. The Haruspex Maximus looks to Alluran, judging the actions of those within the realm while they are still alive and trying to ensure they follow the proper course to pass Alluran's judgement once they die. The Paladin Primus looks to Denariel - he is the member of the realm believed to be most closely following "the way" and is therefore responsible for leading the nation's armies to combat evil.

Rhysten Vision - A vision sent by the Gods, guiding Alowca along the Way

Always Visions - A collection of visions sent by Denariel

Xerxes Visions - Many years on, the Trinity send the same message to the newest Leader of the Faithful priesthood... (There is further discussion on this vision to be found within the following pages.)

The Dreams of Cathal - A young noble receives visions of hope at a time when the Temples of the Faithful are falling into disrepair.