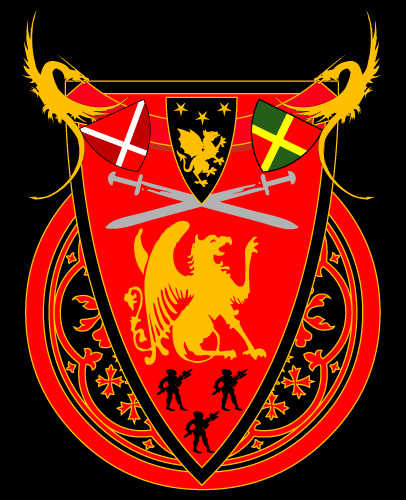 The realm of Caerwyn, a Republic, was one of the first colonies to the founded on the western half of the continent of Dwilight. It is one of fastest growing nations on the continent and is a realm of opportunity and teamwork. We are a close group of hardy colonists, brothers and sisters in arms, under the overall direction of a highly organized upper echelon elected by the Nobility of Caerwyn. We all share the same goal: to be the strongest nation in the central area of Western Dwilight by appling our best efforts to deal with any situation, by trusting in each other, emphasizing the importance of military obedience, and respecting the Realm's Hierarchy.

The Historical Lands of Caerwyn

The General Diplomacy of Caerwyn

It has always been Caerwyn's approach to maintain healthy relations with its neighbors, and in this vein good relations are held with almost every realm on the continent. In addition, Caerwyn and Astrum are Federated Allies with a long standing and close friendship.

Ambassadors of the Realm

Currently there is only one serving Ambassador of the realm, Ereia Stormwind. She was appointed by Archon Baal Zephon Beldragos after her predecessor stepped down from the position.

The Military System of Caerwyn

Caerwyn's military is one of the strongest on Dwilight. It relies upon the pragmatic leadership of its Marshals under the guidance of the Grand Imperator, whom is appointed by the ruler. The current Grand Imperator is Brackern of Burgundy.

The Justice System of Caerwyn

Caerwyn's Justice system is based on a set of clearly defined laws that derive their enforcement powers from the will of the High Magistrate, whose actions and performance are reviewed by the nobility through monthly democratic elections. The current High Magistrate is Hyperion Harte.

Caerwyn's laws, last updated by High Magistrate Baal Zephon Beldragos, have been recorded in the histories as the Laws & Edicts Of Caerwyn. Caerwyn's previous laws have been preserved as the The Supreme Arbitrator's Laws.

First and foremost is of course Caerwyn's own Verdis Elementum, originally found in Dunnbrook, and has sense gone to cover basically every corner of the realm. Sanguis Astroism is noticeably present in a number of the regions along the border with Astrum. Also worth mentioning, Eleryonism has also found a small bastion of believers in the realm as well.

At the moment there is no active, exclusive paper reporting solely on events in Caerwyn. However, the Occidens Occasional is published from within the realm, and the majority of the paper's news is from Caerwyn.

Other newspapers published in Caerwyn include the Caerwynian Chronicle, last issue printed July 2008.

Caerwyn heraldry can be found in the Heraldry Archive conservated in the High Magistrate Office.

The death of Caerwyn was quick and decisive. Caerwyn broke their federation with Astrum and launched a surprise attack from the south, while their Averothian allies attacked from the north. Despite heavy losses in life and land, Astrum successfully defended against both attacks. Caerwyn was unable to advance farther north than Duil and Chrysantalys Mines, and never even attempted to sack either the city of Chrysantalys itself or the townsland of Eidulb Outskirts. Astrum fought back with the help of their allies, Corsanctum and the Morek Empire. Both Caerwyn and Averoth refused Astrum's terms of surrender, choosing to die rather than submit. The city of Itau seceded to form Itaulond which was later destroyed by Asylon and Terran. Astrum took Golden Farrow, and the Via duchy joined Asylon. The last few rural and woodlands regions of Caerwyn desperately joined Asylon, but that realm could not hold the lands and they revolted one by one, to be taken by Astrum.