Difference between revisions of "Arylon Family" 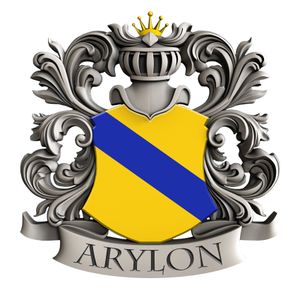 The House of Arylon is a noble house of royal bloodline, originating from the remote regions of the Cagilan Empire on the lost continent of Atamara. The name itself originates from the ancient hereditary title Aryl, which in an ancient Atamaran language means "Lord." Humble in origin, the Arylonians were minor nobles of little fame or authority for generations, before rising in significance and becoming one of the most recognizable noble houses in the known world.

After generations of obscurity, it was the exploits of the brothers of Fisc and Taran that led to the ascension of the Arylonians. Ironically, it was by forsaking their ancestral home and claim on nobility that the brothers would rise. When they came of age, Fisc -- who was always more restless and belligerent than Taran -- was unsatisfied by his position in life, and sought to carve out his own name in battle by traveling to the South-East Island and pledging himself to a realm, Toren, fighting in the perpetual war of that land. There he would distinguish himself, gaining a Lordship, then later becoming Fiduciary, and later still General, overseeing all of the war effort.

Taran remained on Atamara, but equally frustrated by his anonymity and irrelevance among the Cagilans, he abandoned his family estate and traveled to the south-east of the continent, joining the realm of Abington, which would eventually become Suville. There he would thrive, rising to serve as Suville's General for a long period of time, as well as the realm's Master of Law, and Duke of the stronghold of Stoneville.

The family became a royal house when Fisc was forced to flee from the destruction of the South-East Island. He and a combination of Torenites and other refugees from the continent came to the newly discovered land of Dwilight, where they formed a new nation, called Everguard, to which Fisc was proclaimed the first High King. Under his leadership, Everguard prospered and expanded to control the north-west portion of the continent of Dwilight. He would later go on to found the religion of Torenism at the ancient Shrine of Seeklander and serve as a prophet to the God Tor. When the realm of Astrum betrayed their alliance with Everguard, Fisc eventually fled to the nascent realm of Averoth, where he would rise to become Chancellor. After growing disillusioned with the treachery he had experienced, though, Fisc wandered before ultimately taking his wife and young children to the East Continent, where they would quietly settle in an estate and retire from public life.

Some time later, Fisc vanished without trace, leaving their children without a father. At the same time, Taran had also grown dissatisfied with the scheming and backbiting of the Atamaran realms, and set off on a ship in search of the unexplored mysteries of our world. Neither Fisc nor Taran has been seen for more than a decade.

Today, the House of Arylon is once again ascendent, owing to the young noble careers of the children of Fisc and Taran, including Gheric, Lyanna, Taran the second, and Tyran, as well as the exploits of their younger brother Caravanthian. These children, mimicking the adventures of their famous forebearers, have set off to all corners of the world, looking to create for themselves a life of distinction. Gheric has settled in Dwilight, in the realm of Westgard, in the hopes of renewing the legacy of his father on the continent that he feels broke his spirit. Lyanna remained on the East Continent and has forged her own career in the realm of Sirion. Taran the second followed his uncle's path by traveling to the South Island, in search of glory through war on the lands cursed by constant death. Tyran journeyed to Beluaterra and settled in the realm of Nothoi in what he felt was the furthest possible place he could have gone from the name of his famous father. And Caravanthian has found himself on the Colonies, after he attempted to follow his nephew Gheric to Dwilight, only to be blown off course. He now resides in the realm of Halcyon.

Together, this new generation of Arylonian blood hopes to build upon the legacy set forth before them.